Sloth Hammer are an experimental sludge/doom band from the UK. This is their second album.

No guitars, two vocalists, two electronicists, (is that a word?), two drummers, and plenty of bass, Sloth Hammer bring the pain on their second album across a colossal and punishing 78 minutes, recorded live and improvised. END_OF_DOCUMENT_TOKEN_TO_BE_REPLACED

Owlcrusher are a blackened doom/sludge band from the UK and this is their debut album.

Here we have some truly ugly, colossally heavy music, the likes of which you don’t stumble upon too often. Which, for the listener’s sanity and well-being, is probably a good thing. END_OF_DOCUMENT_TOKEN_TO_BE_REPLACED

Razor Sharp Death Blizzard are from the UK and play hardcore.

The UK seems to have such a knack for producing some of the angriest, filthiest, nastiest extreme music out there, and Razor Sharp Death Blizzard are a great addition to the wealth of talent that’s available from the country.

The band have a black metal element END_OF_DOCUMENT_TOKEN_TO_BE_REPLACED

This is the début EP from US Sludge band Moros.

This is nasty stuff. Starting with a harsh feedback-squeal and followed by some dirty bass, Moros start as they mean to go on and establish themselves early as playing the kind of abrasive, nasty music that any lover of Sludge can get on board with.

The vocals are high-pitched and laced with poison, seemingly able to cut flesh with ease just by sound alone.

There are some choice riffs on this release and their bass-heavy sound is an instant hit with a bass-lover like me. Their percussive know-how is enhanced by the vocal attack of their singer so that everything works together to create tracks that really, really hit the mark.

The music takes the template as laid down by Eyehategod, infuses it with the dynamic musical know-how of a band like Fudge Tunnel, adds the bass-led stomp of bands like Palehorse and Ghold, and liberally sprinkles the passion and filth of bands like Charger and Burning Witch into the mix. The result? Passionate, ugly Sludge Metal that sits well in the genre and is highly enjoyable. If you like getting your ears cleaned out with acid, that is.

Loved it. Moros get a big thumbs up. 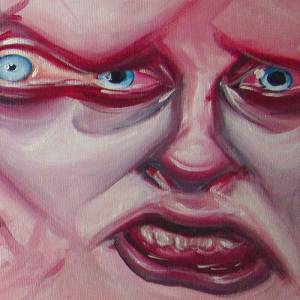 Cult of Occult are a Doom/Sludge band from France. This is their latest album.

This is a band that the word CRUSHING was designed to describe, (yes, in capitals no less). There are five songs here; 65 minutes of misanthropic content.

How to describe Cult of Occult’s nihilistic, hate-fuelled music? They essentially take all of the pissed off, angry highlights of Sludge Metal, (Eyehategod, Charger), and draw them out to epic Doom lengths, resulting in colossal slabs of misery-drenched heaviness that are so caustic and scathing that the songs seem to have a painfully physically presence.

It’s not all ugly belligerence though, as the band skilfully navigate these seas of filth in ways that seem to harness the darkness into tsunamis of torment that crash and build onto and into each other, creating thick, distressing atmospheres.

These songs are deceptively simple though, and upon closer inspection you see that there’s more going on within the oceans of distortion and heaviness than you might think on first glance. The tides of riffs and groove-laden guitars hide a songwriting-skill that belies their nasty, noxious nature.

The singer’s impressive snarl is just shades of anger and repressed rage given form and feeling. Coupled with the Doom/Sludge of the music it seems it’s finally getting the outlet it needs to spew forth its venomous diatribes.

The dirge-like, repetitive nature of the relentlessly crushing music is hypnotic in its delivery and Five Degrees of Insanity is one of those releases that can do no wrong for me.

This is addictive like the worst of drugs. You don’t just listen to this, you feel it.

Colombian Necktie are from the US and this is their début album.

The band have a basis in Hardcore but build elements of Sludge and Metal on top of this to create something heavy, raw and nasty. I’ve been watching this band’s development over the last few splits and EPs that they have released and it seems that with this album they’ve taken everything they’ve learned and ramped it up to the maximum.

A suitably crushing sound heralds the start of the album and it immediately draws you in. The recording is arid, focused and everything sounds both tight and loose at the same time.

Colombian Necktie have a relatively varied sound that employs bits from many different Metal subgenres and puts them to work creating this monument to Hardcore Sludge. Sludgecore, if you will. And I’m glad they did as it sounds just great.

This belongs to the same stable of bands such as Charger, Eyehategod, Enabler, Mistress, Serpent Eater, Ilsa, etc. – bands that are doing their own thing by their own rules and make a virtue out of the heavy, filthy and unclean.

For the most part Colombian Necktie’s songs are tightly compressed balls of rage. Hardcore and Sludge sensibilities combine along with the odd Stoner Rock moment to create an album with a vicious swagger and an attitude that just won’t quit. Add to this the odd synth effect, some other interesting ideas and the emotional closing track Kevin’s Song, (which is by far the longest track here), and you have an engaging and diverse album.

The singer is impressively rabid the whole time and sounds like he would be great live, which of course can be extended to the entire band.

Considering their past releases I was hoping this would be a good album but they have more than exceeded my expectations in this. I knew it would be of a certain quality but wasn’t expecting an album of this depth and nuance.

A highly recommended listen for all connoisseurs of heaviness.

Order of Chaos are from Australia and play a combination of Underground Metal/Hardcore.

This is a hard one to pin down in some ways. It has elements of the more modern Metal/Metalcore sound, but also more of an unhinged, underground vibe and some definite Death Metal/violent Hardcore leanings.

This is more of the kind of thing I would have expected to come out of the UK rather than Australia; I’m thinking of bands like Corrupt Moral Altar, Charger, Raging Speedhorn, Labrat, Mindjuice, Mistress, The Rotted, etc.

Nonetheless, Australia it is, and it’s a good listen. The songs are typically about the 3 minute mark and are focused into little balls of heavy rage. They’re well written and have a good amount of energy. Although the emphasis is on heaviness, small amounts of melody get a look in here and there.

This is a good synthesis of modern-styled Metal with a violent Hardcore element keeping it grounded. It’s underground, nasty and rumbles along with a good chug and a healthy groove.

The singer sounds quite demented on occasion; the higher pitched he gets the more he appears to lose it.

It’s easy to like these songs as the emphasis is on ripping the listener’s face off before they even know what’s happened.

Songs for the moshpit. 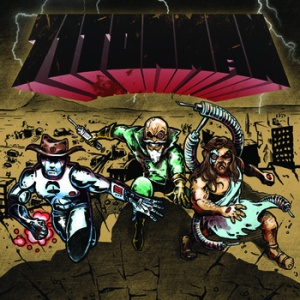 This is the début album from Polish Sludgers 71TONMAN, and they’re as heavy as their name suggests.

Drenched in feedback with rhythmic pounding drums and samples – this is how it starts and I already know it’s going to be good. Then the guitars kick in and the tortured, anguished vocals and you remember why Sludge is just such a damn good genre.

If you cross bands like Eyehategod, Crowbar, Charger and Humanfly then you’d end up with something similar to 71TONMAN. In other words, pure class.

The songs are imbued with a sense of the post-apocalyptic. They weave tales of other worlds and places in with the chunky guitars. It’s all very, very invigorating; take a couple of these songs three times a day and call me in the morning.

The vocals are quite varied, with deeper, higher and almost-cleans all in the mix. It all sounds great.

This is an excellent release from a band with much talent. Make sure you support them and visit their world.