Brazilian thrashers Nervosa’s second album Agony is a relentlessly intense listen that savagely displays its ripping thrash metal with confidence and aplomb. Prika Amaral showed her passion for metal and answered a few questions about the band…

For those who are unfamiliar with your band – introduce yourself, give us a bit of background to Nervosa and how you formed.

I began the band in 2010 with Fernanda Terra (old drummer), we wrote 4 songs and many girls played in the Nervosa, but nobody was professional, in July 2011 I met Fernanda Lira and she completed the line-up. Fernanda Terra left the band in October 2012, in January 2013 we recorded our first album and then in February 2013 Pitchu completed the band. Now we released our second album Agony and we are on tour around the world promoting it.

Nadja’s stunning 41 minute album Sv is a masterclass in tense atmosphere and relentless smouldering soundscapes. As a highly prolific band that have released a plethora of quality material, Sv stands up there as one of their best pieces of work and should ideally be required listening for any discerning music fan. I had the privilege to quiz Aidan Baker, 50% of Nadja, about the release…

Nadja is a duo of Aidan Baker (guitars, vocals, drum machine) and Leah Buckareff (bass, vocals). We make music that has been variously called metalgaze, drone-doom, and (our preferred term) dreamsludge. This is music which incorporates elements of doom metal and industrial with the melodicism and textures of shoegaze and experimental/ambient music. END_OF_DOCUMENT_TOKEN_TO_BE_REPLACED

Hellsworn are a death metal band from the UK. This is their debut EP from a few years ago, re-released with a bonus track.

This may be from the UK, but it has SWEDISH DEATH METAL stamped all over it in giant, ugly letters. It’s raw, filthy and has enough chainsaws to keep any fan of the style happy.

Yes, yes, I know; do we really need another band playing this kind of thing? Well, as I sit here listening to it at the moment, I can only conclude that we do, as they’re currently END_OF_DOCUMENT_TOKEN_TO_BE_REPLACED

This is the début EP from Crematory Stench, who are a US death metal band.

This is the debut album from this Greek psychedelic doom band Green Yeti.

This is huge music from a huge green monster. What’s not to like?

There’s over an hour’s worth of music on here, spread across four colossal songs. And what damn good songs they are too.

The band jam out riff after riff, exploring psychedelia, doom, stoner and all things END_OF_DOCUMENT_TOKEN_TO_BE_REPLACED

This is the second album from Third Ion, a progressive metal band.

Third Ion’s début album 13/8bit was an atypical slice of progressive metal that took a lot of inspiration from video games and chiptune. It shouldn’t have worked, by all rights, but in the band’s skilful hands the album avoided becoming some nonsense novelty and instead they produced an enjoyable 55 minutes of music that offered the listener something a little different.

So what’s changed? Well, they now have a new singer – Dave Padden – END_OF_DOCUMENT_TOKEN_TO_BE_REPLACED

Monument of a Memory are from the US and play modern metal. This is their second EP.

This is modern metalcore with plenty of aggression and heaviness. The foundation of NWOAHM is intact and added to by some heavier and faster parts, which is always nice to hear.

With a strong sound the band rip through END_OF_DOCUMENT_TOKEN_TO_BE_REPLACED

This is the début release from Infernal Diatribe, an Indian black metal band.

This is occult black metal, played with grim atmospheres and morbid delight.

Videha Mukti has a very satisfying production, with the drums in particular coming across well. Whether the drummer is throwing out blast beats, providing a firm double bass bedrock or merely playing a solid beat, it all gives the blackened END_OF_DOCUMENT_TOKEN_TO_BE_REPLACED

Carnifliate are a Slovenian death metal band and this is their début album.

Carnifliate play death metal with a bit of deathgrind and a sizeable chunk of huge grooves.

The songs are brutal and straight to the point, but they’re probably not quite what you END_OF_DOCUMENT_TOKEN_TO_BE_REPLACED 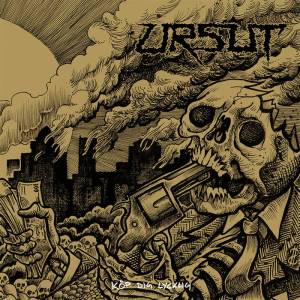 This is the second album by Ursut, a hardcore band from Sweden.

The first thing that strikes me about Ursut is the strong guitar sound. It’s thick, heavy and as black as tar. This is not to mention the winding leads and overal apocalyptic sound that greets you once you press play. Initially I END_OF_DOCUMENT_TOKEN_TO_BE_REPLACED