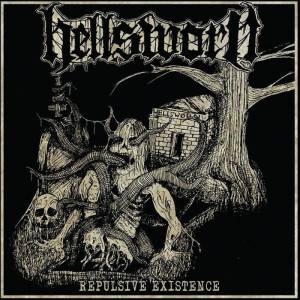 Hellsworn are a death metal band from the UK. This is their debut EP from a few years ago, re-released with a bonus track.

This may be from the UK, but it has SWEDISH DEATH METAL stamped all over it in giant, ugly letters. It’s raw, filthy and has enough chainsaws to keep any fan of the style happy.

Yes, yes, I know; do we really need another band playing this kind of thing? Well, as I sit here listening to it at the moment, I can only conclude that we do, as they’re currently making me smile uncontrollably. That’s probably not the band’s real intent, of course, dealing with music like this, but who cares? Death metal is good for you.

So; death metal. Old-school in style, Swedish in flavour. This means songs that are covered in dirt and darkness, ravaged by plague. This may have been festering in the underground since it was unleashed from its mouldy tomb in 2012, but it sounds like it has been around for much longer than that.

One thing I like about these songs, (one of many), is the quality of the solos and leads on it. Sure, they might not be the most flashy or ostentatious around, but they don’t need to be; what they are, though, is eerie, creepy and downright sinister in vibe. Hells yeah.

Fans of Grave, Dismember and Bloodbath should lap this up. It’s well-written death metal that hits the spot nicely. As this is a few years old now and is still the only thing they have released it begs the question – what’s next for Hellsworn? Hopefully something good, as Repulsive Existence demands an encore.