This is the seventh album from German Black Metal band Todesstoss.

At 75 minutes in length this is a long album that only contains 3 tracks. I mention this purely to set the scene for the kind of sprawling, unconventional, Blackened vision that Todesstoss have.

This is Experimental Black Metal that takes the serrated core of Black Metal and adds Electronica, Ambient, Martial, Dark Rock, Avant-Garde and Depressive tendencies to it, creating songs that are unhinged marvels of deranged darkness.

Various instruments and flashes of sound compliment the core instrumentation and the mangled, psychotic vocals punctuate the music like stab wounds. His violent outbursts are quite disturbed and fit the uncompromising music.

Think bands like Bethlehem/Burzum/Deinonychus/Dødheimsgard, only stretched out to the extreme.

There are a lot of themes and moods spread across these tracks and it’s clear that a lot of work and effort has gone into perfecting the meaning and rationale for the existence of every part of this music. To some listeners it may seem as if occasional bits of noise or instruments are randomly inserted here and there, but I suspect that everything is where it is for a reason.

These certainly aren’t songs in the traditional sense, but rather canvasses of sound that are used for exploratory experimentalism by their creators to give voice to what dwells inside them. It’s a fascinating insight into a warped psyche as portrayed via the medium of mutated, corrupted Black Metal.

This is not an album you enjoy in the traditional sense. It’s an album you survive, and then, suffering from Stockholm Syndrome, you develop an affinity for the abuse it puts you through and eventually go back to it time and time again for more punishment. 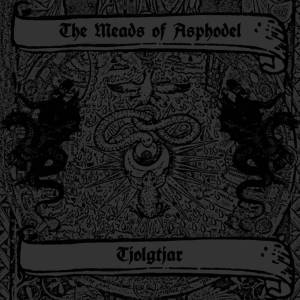 The Meads of Asphodel are from the UK and play a very individual brand of Black Metal. Here they team up with US one-man Black Metal project Tjolgtjar, who you may remember from 2012’s Kjal Tjormejn.

As such, this is an interesting and exciting split release from two atypical Black Metal bands that succeeds in putting two very individual and different spins on this well-worn genre.

The Meads of Asphodel are up first and contribute 16 minutes to this release.

The Meads of Asphodel always manage to imbue their songs with such personality and character, due in no small part to their charismatic singer Metatron. On this release he’s as expressive as ever and has his performance aided by other vocal styles such as croaking screams, ghostly chants and female vocals.

The music manages to be underground, extreme and catchy all at the same time. Classic Blackened blasting and experimental pseudo-Pop share space on this impressive collection of tracks and whether they’re playing fuzzed-up, dirty Black Metal or synth-heavy atmospheric sections, The Meads of Asphodel are at the forefront of Experimental/Progressive Black Metal.

After this it’s on to Tjolgtjar, supplying 18 minutes of music. It’s an odd, atypical expression of Black Metal, with a more garage, underground feeling than the more flamboyant tendencies of The Meads of Asphodel.

In some ways Tjolgtjar remind more of a conventional raw Black Metal band, but this is only superficially true. Upon closer inspection, the riffs and general composition of the music is unusual. Even when the blast beats are flowing swiftly, the guitars are playing Blackened rhythms and melodies that are almost like semi-distorted Country/Folk acoustics. Almost. It’s as if this music came from decades ago and is a Black Metal version of 70s Progressive Rock.

The vocals are screamed croaks but also benefit from cleaner accompaniments. It’s an added extra that, when combined with the music, reinforces the 70s music connection, at least to my mind.

But this is what Tjolgtjar do so well; their music is not your average Black Metal and their contribution to this split is superbly delivered and realised.

This is a very impressive release from two impressive bands. If you’re looking for Black Metal that’s challenging and different from the norm then this should be your first stop. 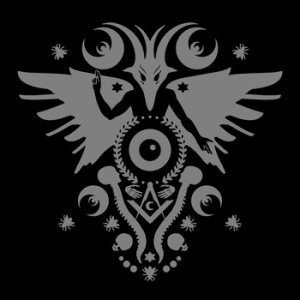 Convulsif are from Switzerland and this is their third album.

Well this is quite insane. Imagine Ephel Duath, Fantômas, Blut Aus Nord, Atomsmasher and Sunn 0))) all working together to bring on the apocalypse…it’s intense.

The recording is first rate, with everything sounding clear and precise, but not overly so. I especially like the bass presence, which provides a full contribution to the aural chaos.

This features eclectic Metal, freestyle Jazz and Progressive workouts as well as Drone/Doom sections, all plastered together in a melange of Blackened undertones. What to classify this as? Who knows, but it’s pretty damn good. I suppose you could loosely term it Experimental Black Metal, but Convulsif are a band that genre tags just don’t work for.

There are no guitars, which makes CD3 an even more interesting listening experience. Instead, we get drums, bass, clarinet, violins and electronica. Just what the (mad) doctor ordered.

And when you think you’ve heard it all, they do something else that makes you sit up and take notice. The unexpected, demented screaming that suddenly appears just when you’ve taken them for an instrumental band is a case in point.

This is highly creative and individual music that nonetheless manages to create coherent atmospheres across these 29 minutes. The eerie sounds and otherworldly noises emanating from this recording is a testament to the talent of the individuals involved in its birth.

CD3 just needs to be experienced. This is challenging, interesting music that demands your attention.

I love this. What’s not to love? You’ll love it too. LOVE IT!

Crowhurst are from the US. This is their latest album and it’s a bit different from their usual experimental, noise-drenched output; this is Black Metal.

The guitars are as thick as syrup and they’re both heavy and melodic. Crowhurst foster an interesting atmosphere of colourful darkness that is rich in both texture and emotional content. This is Black Metal that may have a cold heart but it has an exterior that’s warm to the touch.

The screaming vocals are high pitched and piercing. They’re set low enough in the mix to become one with the music but high enough so that they’re not lost or overwhelmed.

Part Blut Aus Nord, part Xasthur and part Deafheaven; this is richly evocative music that has elements of the Cascadian and Shoegaze movements in addition to the band’s own heart of darkness.

The final track, Luna Falsata, finally gives in to some of their usual style of harsh electronics and experimentalism, as well as also featuring the vocalist of Oxbow.

This is a highly impressive collection of songs that show a mastery of a genre that the band don’t normally dabble in. 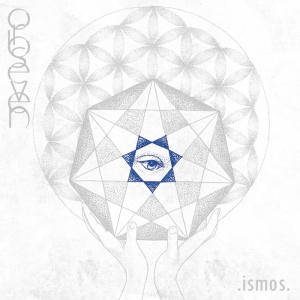 Orbseven is a solo project from the US and this is the third album of Experimental Black Metal that the project has unleashed.

This is a combination of electric Black Metal, sleek Post-Black Metal and ambient/avant-garde darkness. It’s an interesting combination and the resulting album is an exploration of state-of-the-art Blackness and atmospheric expression.

Darkened sounds and interesting effects enhance the tracks in a way that’s subtle enough to not steal any thunder from the main driving force of the guitars but has enough impact to be noticeable.

The songs are propelled by Blackened melodies and experimental sound structures, but there’s also enough Post-Black Metal wanderings to allow the room for shades of both light and dark. They’re well written, have great dynamics and are potent affairs.

.ismos. fosters an atmosphere that’s vaguely mechanistic but overtly malevolent and mysterious. Everything about this album from the music itself to the album cover deals in these mysteries and although there are no answers forthcoming the search for them is what’s important.

The vocals are a curious and varied affair. Multiple styles collide as spoken/distorted words, barely audible pseudo-ethereal sounds and subtle cleans all appear at various times during the tracks.

If you think along the lines of Dødheimsgard, Aborym, Red Harvest and Arcturus then you’ll have a good idea of the basic building blocks of the Orbseven sound. There’s even a couple of riffs here and there that wouldn’t sound out of place on a Mastodon album.

Orbseven is a creative and novel approach to what Black Metal should sound like in 2014. Taking the basic Black Metal template and building/distorting it is common enough, but the always interesting thing is where the band ends up once they have done this. In the case of Orbseven we end up with Experimental/Post-Black Metal that rolls smoothly out of the speakers.

A great effort – show your support. 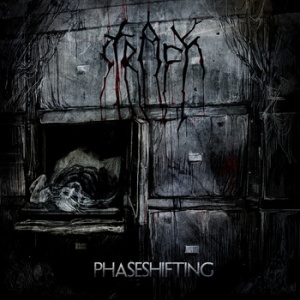 Strafk are from Russia and play Black Metal.

This is Experimental Black Metal with an Industrial feel. The sound is a very nice one; warm and deep but tinged with a rougher, almost creepy vibe that complements what the band is doing well.

The dark and menacing guitars combine piercing, angular riffs with fuller sounding sections to have a good mix of the both. They seem to creep around the songs with nary a care in the world.

Slouching, at ease; this is Black Metal that’s unhurried and almost free form in its composition in some respects, although everything is held together by the drums on one side and the electronics/effects on the other.

Vocally we have sub-audible mutterings that, like the guitars, only loosely follow what is going on with the rest of the track. Like the guitars though, this lends things a feeling of freedom to explore the surroundings while the aforementioned percussion and noises stop things from wandering off too far.

This is the sound of a band experimenting with Black Metal; exploring the ruins at the base of the genre, collecting what remains of past travellers and using them as a basis for reanimation and a new creation.

I don’t know what they will end up with eventually but I’m quite happy to spend time with them as they build it.

Abbey ov Thelema are from Slovakia and this is their second album.

They play experimental, avant garde Black Metal. Highly orchestrated and complex, this is ambitious and bold as only the best Black Metal can be. Although saying that, Black Metal may be the underpinning starting point but it’s mutated and morphed far from it’s original format.

The tracks can be both chaotic and coherent; energetic and subdued; eclectic and considered. Sometimes it sounds as if The Dillinger Escape Plan had been consumed by Ebony Lake with Arcturus and Dødheimsgard overseeing proceedings.

There is clearly a lot of high class musicianship at play here, with everything arranged to exacting standards to create a whirling maelstrom of conflicting soundscapes that approach like furious waves and lash at the listener, never letting them rest or prepare for what comes next; the moment one onslaught of musical might crashes by the next tsunami of sound is about to hit.

It’s not all about the, (barely), controlled chaos of course, they also have calmer moments. These lulls act like buffers between the oncoming storms that they irregularly unleash.

This is not a band that will appeal to lovers of standard song structures and musical rules, but people who are looking for something a bit more adventurous should definitely check this out.

Ultimately this is a very hard album to describe as mere words don’t adequately do it justice. Abbey ov Thelema create a sort of demented majesty that really needs to be heard to fully appreciate what they’re about.

So strap yourself in, don the safety goggles, brace yourself and play at top volume.