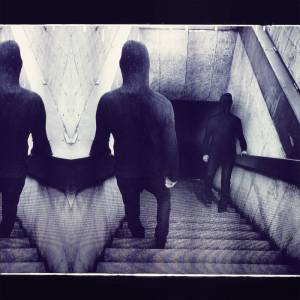 Emptiness are from Belgium and this is their fifth album. They play experimental black metal.

If you’re after the bog-standard blackened bile and hatred so common in the style then you’ve come to the wrong place. Not for Music is far different from that. Taking black metal as its spiritual muse, this album leaves the workaday version of black metal largely behind in favour of something birthed from the discarded remains of its parent genre.

The songs on Not for Music are synth-heavy, painting vast soundscapes populated with ambient atmosphere and blackened intent. There are elements of the industrial and the Gothic styles in some of the music on here. However, combined with the band’s blackened parentage and the intense delivery of the relentless atmospherics, Not for Music is far more effective at what it does than most industrial or Gothic bands.

These tracks each have their own enticingly dark personalities, sharing common ideas and motifs, yet each realised in its own way. Each song rotates around similar thematic boundaries, probing and testing for vulnerabilities. Finding none, they coil in on themselves, doubling down on their own rich atmospheres, seemingly bubbling within themselves with an urge to create something even more malevolent and grand than that which they already embody.

Not for Music is an alluring and captivating listen. Emptiness are clearly forging a path of their own design, one which is carved with the broken ideas of lesser bands. Succeeding where others have failed at pursuing their own vision, Not for Music provides that rarest of things; music which sounds like itself much more than it sounds like anyone else.

It’s time to get lost in Emptiness.