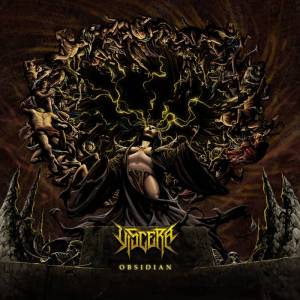 Viscera are a deathcore band from the UK and this is their debut album.

This is the second album from US Modern Metal band Devil You Know.

Featuring ex-members of such high-profile bands as Killswitch Engage, Divine Heresy, All Shall Perish and Bleeding Through, you know there’s a wealth of experience and talent behind this album before you even press play.

When you do press play, I like that there’s no messing around with pointless intros or anything like that; it’s straight into the double-bass led action, with plenty of heaviness and groove.

The singer is on fine form. Whether he was shouting at the top of his voice in Killswitch Engage or Blood Has Been Shed, he has always had a top-rate set of lungs. The majority of his work on They Bleed Red is angry and harsh shouting, although other variations are also used, as well as his clean singing voice.

The music is heavy and full of rhythmic Metal that also takes influences from both Metalcore’s beatdowns and the more extreme, faster side of Modern Metal. Although it’s all thoroughly modern and new-sounding, they still find the time to add in some more Classic Metal influences, including the odd guitar solo.

The production, as should be expected from a band like this, is huge and crushing. Bands like this need a strong sound as otherwise the power of some the riffs can easily be distilled. No such worry here, of course, and you can feel every guitar riff and drum beat.

They Bleed Red is a good combination of the more commercial side of Metal mixed with a heavier, more extreme sensibility. It’s too heavy and shouty to be as popular as a band like Killswitch Engage, but it’s got a commercial edge and songwriting-calibre that will see it snapped up by those who like some catchy songs with their heaviness.

Give it a listen and see what you think.

Our Last Enemy have recently released their latest album Pariah, in all its Industrial Metal glory.  I got to grill Matt Heywood and Oliver Fogwell from the band about the album and what makes them march to the pulsing, Industrial beat.

For those who are unfamiliar with you – introduce yourself!

We’re Our Last Enemy and we’re from Sydney, Australia. We play a type of Industrial Metal. We like the listener to decide what it is exactly.
We are:
Oli – Vocals
Bizz – Guitar
Jeff – Keys
Matt – Bass
Zot – Drums

How did you form?

The band was formed in late 2006 in Sydney, by Oli, Jeff and myself (Matt), and we were introduced by a mutual friend after our previous bands had disbanded.

Bizz joined the band in 2010 after leaving his previous band Genitorturers and re-locating to Sydney and was also introduced by mutual friends.

Zot joined the band in 2013 and had originally played in a band with Oli before Our Last Enemy. It’s all in the family here down under! There’s a lot of history and experience between the members having played in various bands for many years.

We all have different a varied styles of music that we listen to individually, with the common thread being metal, electronic music and just plain weird shit!

In terms of what influences us, I guess we influence each other when someone brings in an idea for a song and what that idea makes the rest of us feel or think.

Well I know all 5 of us love the new-ish ‘Bring Me The Horizon’ album, I know they’re very “scene” and popular at the moment – But that album is fucking brilliant! So we would recommend that album for people who can look past their “scenester” audience.

I’m also listening to Phil Anselmo’s new album – Walk Through Exits Only – Its great! It’s a no bullshit album that doesn’t pull any punches and doesn’t try to be one form of heavy music or fit into some sub-genre! Phil is still one of the best frontmen in the world!

Why did you decided to incorporate Industrial and atmospheric parts into your songs, rather than just sticking to the more “traditional” instruments?

That’s a good question – probably because anything traditional bores the living fuck out of us! All 5 of us would rather punch ourselves repeatedly in the testicles than listen to an entire album of like…U2 or Coldplay or something like that.

But I guess it’s because we all love different styles of music even some “traditional” style of rock music… some.

So there was never really a moment where we decided to incorporate industrial or atmospheric parts into our songs it’s just what we do. 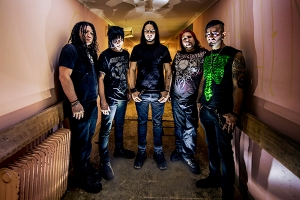 Are you happy with how the album came out?

Yeah, very happy… Having Christian (Olde Wolbers – ex Fear Factory) on board as producer was great, it was a great learning curve for us and it was great to have his experience in the studio.

We tried to give the listener as much value as possible, choosing our favourite songs and also adding the remixes from Mortiis, Angel (Dope) and Travis (Divine Hersey) who we thought did a great job.

There is a central theme to the album on a character we call ‘Pariah’ who causes/follows/is a witness to anything devastating in our world, whether it’s the past, present or future. He doesn’t die, he doesn’t live. He’s is neither the devil nor god, he is just devastation. Or a very unlucky soul.
What is your aim with Our Last Enemy – what do you want to achieve?

Our answer would be the same as any honest band or artist, without getting into a particular agenda – we want to get our music out to as many people as possible, pushing our particular style of art as far as we can, which we hope will lead to a strong career so we can continue to make music.

What does the future hold for Our Last Enemy?

Well, our album drops on March 11th 2014 all over North America through Eclipse Records. We will be doing a North American tour soon, which we can’t elaborate on anymore at the moment and in the meantime we’re writing our second album. We like to stay busy.