This is the third album from UK black metal act Sidious.

I’ve enjoyed watching Sidious develop from their symphonic black/death beginnings, (Revealed in Profane Splendour), to their metamorphosis into the pure black metal form of their last album, (Temporal). Now we have Blackest Insurrection, where the band spend 48 minutes showcasing a refinement of their raw blackened assault. Out of the two, I’d say that this is the superior release when compared to Temporal, and it’s great to hear the band improving their sound. END_OF_DOCUMENT_TOKEN_TO_BE_REPLACED

Anomalie are an Austrian post-black metal band and this is their fourth album.

Following on from 2017’s well-received Visions, (via an EP I haven’t heard), Tranceformation contains 44 minutes of new material, and comes with a newly-focused direction to boot. A rough reference point for what Tranceformation sounds like would be a mix of bands such as Schammasch, Enslaved, and old Anomalie, although to be honest this is only a very approximate guide at best, especially as some songs have a modern doom metal flavour too, (most notably opening track). END_OF_DOCUMENT_TOKEN_TO_BE_REPLACED

Enthroned are a black metal band from Belgium and this is their eleventh album.

Following on from 2014’s Sovereigns, which I really liked, we now have a new 19 minutes of material from this legendary band. END_OF_DOCUMENT_TOKEN_TO_BE_REPLACED 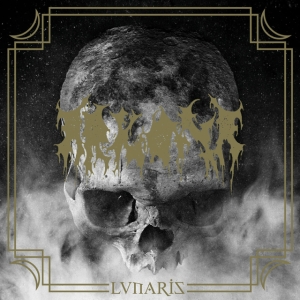 Hailing from Poland, Arkona are a veteran black metal band and this is their sixth album.

Lunaris boasts 48 minutes of the kind of second wave black metal that would be right at home had it actually been released in the 90s, probably about the time that Arkona actually formed.

This is an album based on the classic black metal template of the time, forged through experience and the hands of people that have been doing this long enough to know how to write good black metal. And it is very, very good.

Enthroned are a veteran Belgian Black Metal band that need little introduction; this is their 10th album.

It opens with a massive ominous intro. Normally I’m against pointless intros as they usually serve little purpose, but this one is compelling and the horns sound immense; it sets the scene well for the approaching carnage.

It takes time to build up to a fast tempo; instead it starts slowly and ritualistically, taking advantage of mood and atmosphere. Once sated however, Hell is then unleashed and the band rip forth with scorching Satanic Black Metal.

For a band who are so well established and have so many releases there is still a hunger at work here and it comes across in the songs.

Some of the riffs and melodies they use are extremely tasty and designed to evoke feelings of almost tense uneasiness. Extra effects, horns, etc. further add to the mood and Enthroned show themselves to be on the top of their game. Just listen to the start of Lamp of Invisible Lights for example. I mean come on! Other bands just aren’t trying by comparison. The album is full of moments like these.

The band have an evolved sense of dynamics and the songwriting on this release is very enjoyable. They appear to have developed an aura of corruption and awe-filled terror for this album. It reminds me of the recent masterpiece by Corpsessed, only filtered through a razor-sharp Black Metal lens.

The band explore a variety of interesting ideas and songs structures within the confines of their chosen genre. This is not an album that sounds repetitive, and even features that rarest of things – the, (whisper it!), Black Metal guitar solo.

Enthroned appear to just be improving with age. This is a brilliant album and a must for all fans of Extreme Metal. I really can’t say enough good things about Sovereigns; this is exactly what I want from Black Metal in 2014.