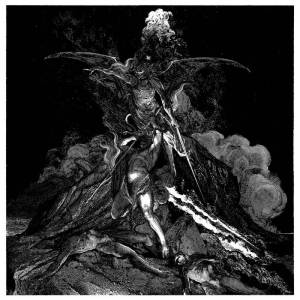 This is the third album from UK black metal act Sidious.

I’ve enjoyed watching Sidious develop from their symphonic black/death beginnings, (Revealed in Profane Splendour), to their metamorphosis into the pure black metal form of their last album, (Temporal). Now we have Blackest Insurrection, where the band spend 48 minutes showcasing a refinement of their raw blackened assault. Out of the two, I’d say that this is the superior release when compared to Temporal, and it’s great to hear the band improving their sound.

Sidious play harsh second wave-influenced black metal that’s charged with fury and hate. Some of the guitars reveal more modern influences too, so I wouldn’t describe Sidious as an old-school band. Rather, they play black metal that is obviously in the classic style, but that hasn’t ignored the last two decades.

The songs are sharp and lethal. Blackest Insurrection takes no prisoners, and shows no mercy. The songs are well-crafted and allow the listener to get in close before savagely ripping their throat out. The band’s approach to their art is professional and well-judged, but doesn’t lack in raw aggression or underground bite. It’s uncompromising, but not impenetrable; Blackest Insurrection is a satisfying and enjoyable slice of darkness, and many a black metal fan will find much to enjoy here.

If you’re partial to bands such as Dark Funeral, The Infernal Sea, Enthroned, Watain, and Barshasketh, then there is much to recommend here.