This is the second album from Danish melodic death metallers Sylvatica.

The core of Ashes and Snow‘s 43 minutes is that of melodic death metal. This is then augmented by folk and symphonic metal influences. If you think you’d enjoy a band that mixes together aspects of groups such as END_OF_DOCUMENT_TOKEN_TO_BE_REPLACED

This is the debut album from US black/death metal band Foretoken.

So, you fancy a good-sized chunk of Scandinavian death metal? That’s no problem, take your pick. What’s that? You also want a decent black metal influence to be felt? That’s easily done. Now you want a take on the style that’s highly melodic too? Sure, END_OF_DOCUMENT_TOKEN_TO_BE_REPLACED 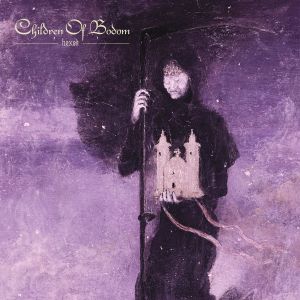 Children of Bodom are a melodic death metal band from Finland and this is their tenth album.

And now we have Hexed. Yes, there are other albums too, in addition to the ones mentioned above, but you get the general idea.

Hexed contains 45 minutes of rocking melodeath, which consists of ten new tracks and, curiously, a reworking of an older song, (Knuckleduster). My verdict? It seems Children of Bodom have returned to the quality levels of the late 90s/early 00s. Yes, you read that right.

Prominent, expressive keyboards work wonders with the material. Songs that are catchy and memorable tear out from the music like bladed predators scything through the airwaves. Old school rock and metal elements are captured in the band’s electrifying songs, especially in the melodies used. Aggressive, energetic, and melodic, Hexed is full of good tunes and confident attitude.

I’m impressed. I’m very pleased to say that the band sound revitalised, despite how much of a cliché that probably comes across as. The album art suggested something along these lines when I first saw it, but the music firmly backs it up.

Hexed is Children of Bodom’s best album in years. I feel like I’ve rediscovered an old friend.