END_OF_DOCUMENT_TOKEN_TO_BE_REPLACED

So what do we have for you this month? What new batch of metal delights has been unleashed upon the world in October? Let’s find out… END_OF_DOCUMENT_TOKEN_TO_BE_REPLACED

This is the fifth album from Vanhelgd, a death metal band from Sweden.

Both 2014’s Relics of Sulphur Salvation and 2016’s Temple of Phobos are prime examples of quality and creative death metal done right. The latter made it onto my 2016 end of year list, such was the impression it made. As such, I’ve been eagerly awaiting more material from this sterling band. END_OF_DOCUMENT_TOKEN_TO_BE_REPLACED

Temple of Phobos is a monster of a death metal album. Vanhelgd have shown, once more, that they really know what they’re doing with the style. If you’re a fan of well-written death metal that effectively combines both heaviness and atmosphere, then it’s absolutely an album to check out. With that in mind, let’s find out a bit more…

For those who are unfamiliar with your band – introduce yourself! Give us a bit of background to Vanhelgd

In the end of the year 2007 Vanhelgd was formed by Björn Andersson (drums), Jimmy Johansson (guitars, backup vocals) and Mattias Frisk (guitars vocals). After making a unreleased demo Vanhelgd recorded eight songs in Backbone studios in Mjölby and the first full length album “Cult of Lazarus” was released by Crematorium Records in November 2008. The band got in contact with the US based Nuclear War Now! Records who decided to release “Cult of Lazarus” as a 12” LP in 2009. In the Summer of 2009 Vanhelgd recorded a couple of new demo songs. One of the tracks from that session, “Nec spe, nec metu” was featured on the “Invocation of death” compilation, released in June 2010 by Death invocation records. Vanhelgd started to work with the recording for their second full-length album “Church of Death” in april 2010. Due to various problems they didn’t finish until September the same year. Two of the songs were taken out to be featured on the EP “Praise the Serpent” which was released on the Nuclear War Now! Fest part 2 in Berlin where the band also performed. In 2013 bass player Viktor had to leave the band and Jonas Albrektsson ( King of Asgard, Retaliation, ex- Thy Primordial) joined for the third album ”Relics of Sulphur Salvation” that were released by Pulverised Records and 20 Buck Spin. In the end of 2015 Vanhelgd once again entered Studio Underjord to record their fourth studio album ”Temple of Phobos” that will be out on July 22 on Pulverised records and Dark Descent. END_OF_DOCUMENT_TOKEN_TO_BE_REPLACED 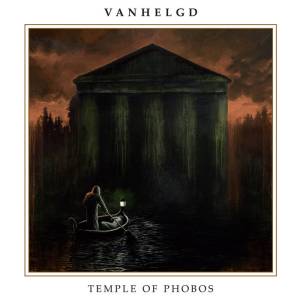 Vanhelgd are a Swedish death metal band and this is their fourth album.

The band’s third album Relics of Sulphur Salvation was solid, authentic Swedish death metal with chainsaw guitars and a sharp sense of melody.

On this new album the band continue to play the style that made their previous release so enjoyable, only I’d say that END_OF_DOCUMENT_TOKEN_TO_BE_REPLACED

This is the third album by Swedish Death Metallers Vanhelgd.

Interesting fact – the vast majority of all of the bands that I have reviewed who have been playing the Swedish Death Metal style haven’t actually been from Sweden. Here, however, we have the real thing; authentically Swedish and authentically Death Metal.

So, if you’re a fan of this genre, or even someone who merely flirts with it now an again; you know what to expect here. That doesn’t diminish its impact one iota though.

This is Death Metal with chainsaw guitars and a razor sharp sense of melody. The riffs and spiky melodics threaten to lacerate, they’re that focused.

They have the song skills that go hand in hand with this style and inject a real sense of horror and suspense into proceedings. Vanhelgd are especially good when creating an atmosphere with their riffs; when the dark melodics crash into each other or propel the song onwards underneath a sea of blastbeats. Crushing stuff.

There are eight songs in total and each one is all brawn and gristle. Vanhelgd are perfect ambassadors for this style and present it in its best light.