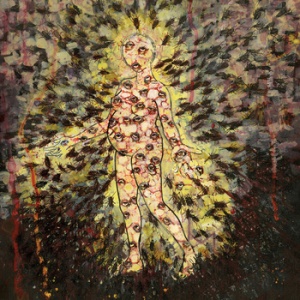 Pyrrhon are an unusual Hardcore-influenced Technical Death Metal band from the US and this is their second album.

They kickstart proceedings with an entry track that would do Converge or Cephalic Carnage proud. The Oracle of Nassau explodes out of the speakers all frenzy and bile, and for 1:25 it proceeds to annihilate everything. In complete contrast the next song White Flag starts off slow and menacing, and lasts for a much longer 9:42.

The vocals are screamed static attacks or brutal guttural growls, depending on the mood of the singer.

The music is technical, involved and very intricate. The instruments twist and turn and play all manner of elusive riffs; the listener is submerged in a lake of discordant dissonance that somehow manages to satisfy in spite of the multiple disparate elements being unleashed.

This is the clever thing though, as each instrument by itself is exploring its own path but everything gels together for the benefit of the wider picture in ways that you wouldn’t expect. The songs manage to be exploratory and experimental while remaining coherent and delivering a completed whole.

Angular riffs, wilful bass, schizophrenic drums and daemonic vocals collide to create a challenging and ultimately involving listen. The songs owe about as much to the violent Hardcore background of bands such as Converge, Botch and The Dillinger Escape Plan as they do to Technical Death Metal.

Pyrrhon strike me as having a combination of sounds from bands as diverse as all of the previously mentioned ones, as well as having elements of bands like Uphill Battle, Gorguts and Today Is The Day.

If you’re looking for a new band to obsess over who are not your average band then say hello to Pyrrhon. This album is a must.