This is the debut EP from German black metallers Bestialis.

Ritus provides 17 minutes of black metal, and serves as a good introduction to the nefarious talents of Bestialis. The band’s style is rooted in traditional black metal, but also contains elements of more modern styles too. As a very rough END_OF_DOCUMENT_TOKEN_TO_BE_REPLACED 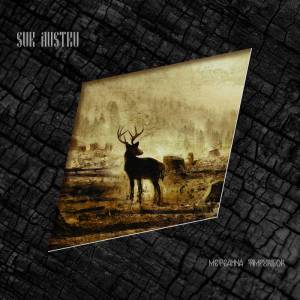 Sur Austru are an atmospheric black/folk metal band from Romania and this is their debut album.

Featuring ex-members of Negura Bunget, Sur Austru play a black/folk metal hybrid that has surprised me by how much I’ve enjoyed it. END_OF_DOCUMENT_TOKEN_TO_BE_REPLACED

Jarun are a Polish progressive black metal band and this is their third album.

This is the fourth album from this black/Pagan/folk metal band Thy Worshiper.

I’ve been following this band for a while now, and their individual take on black metal is always a very welcome listen. Both Czarna Dzika Czerwień and Ozimina were very enjoyable, and it seems on their latest album Klechdy they’ve really END_OF_DOCUMENT_TOKEN_TO_BE_REPLACED

This is the latest EP from Thy Worshiper, who play pagan/folk Black Metal.

The band’s previous release Czarna Dzika Czerwień is one that I really enjoyed, so this EP I was eager to hear.

Featuring music that’s heavy on percussion and non-standard instruments, (such as didgeridoo, darbuka and djembe, to name a few), Thy Worshiper continue their individual and characterful melding of folk, pagan and Black Metal influences into their enticing brand of music.

These tracks are rich and layered songs that cover themselves with emotion while providing enough substance and grit to back it up, ensuring that they have produced a real collection of songs and soundscapes, rather than novelty or throwaway music.

Vocally, the female vocals sound even more beautiful and powerful than before, and combined with the rhythmic pulsing of the music are a real highlight. The male vocals remind me of those of The Meads of Asphodel in places on this release more than on their previous album, which adds a different slant for me.

Clearly a lot of work has gone into arranging and composing this EP, and the end result speaks from the heart and burns as deep as fire.

Another sterling release from this important band.

Jarun are a Black Metal band from Poland and this is their second album.

This release combines considered reflection, passionate delivery and fiery Black Metal into a cohesive hole that does well to temper Black Metal’s dark flame with a subtle Folkier perspective. The Progressive Metal elements fit well into this musical tapestry and allow the music an even broader scope.

If you think of a merging of Enslaved, Thy Worshiper, Opeth and ugly, primitive Black Metal then you’ll be on the right lines. The juxtaposition of the raw Black Metal core with the sophistication and nuance of Progressive Black Metal is enough for many bands to contemplate, but add to this some Folk influences and Pod Niebem Utkanym z Popiołu becomes even more impressive.

The band have a guitar sound that they use well; when distorted it’s gritty and abrasive, but when the distortion fades it’s nicely clean and polished.

The vocals are gruff, savage barks that wouldn’t be out of place on an underground Grindcore release. They add real bite to the tracks and show that Jarun have that aggressive core, even when the music is more refined.

These songs are impressively realised beasts that have a lot of variety and content to them. They’re well-written and the playing time makes the most of the incorporated styles to take the listener on a journey through Jarun’s highly textured world.

Jarun strike the right tone with their songs and they get the correct balance between their particular influences. Acoustic and cleaner sections abound within the heavier, grimmer framework and the riffs, solos and leads all add a lot to the moods they create.

When I first approached this release I wasn’t sure what to expect; the cover gives little away, and I don’t read Polish so apart from knowing it was a Black Metal release of sorts, that was all. As it turns out, Pod Niebem Utkanym z Popiołu has been an extremely pleasant surprise. I love albums that have a depth to them and Jarun succeed in being able to write songs that capture the attention with their Progressive style and yet have ample enough aggression to satisfy.

I do fear this is somewhat destined to be a lost gem; let’s try to stop this from happening. Jarun are a band more than deserving of support; this is an impressive album from a talented band.

Thy Worshiper are from Poland/Ireland and play Black Metal with a very tribal/folk feeling and influence.

There is a very ritualistic feeling to these songs, added to considerably by tribal drums, female vocals, driving percussion, unorthodox instruments, etc. All of these enhance the flavour of the album and contribute to a 46 minute listen that explores a very rhythmic, pounding Black Metal. A modern version of a folk tale nightmare; the feelings and images described by Czarna Dzika Czerwień are astounding.

The folk influences are poured neatly into the Black Metal mould and solidify seamlessly to create a work of art that simply demands to be heard.

For me personally a lot of “Folk Metal” just sounds weak, wishy-washy, and more-often-than-not simply heralds a band unsure of their direction or of what to do with their Folk influences. None of these criticisms can be levelled at Thy Worshiper. The combination of Folk and Black Metal they create is handled with expert ease and every track sounds alive with history and tradition.

It can be a cliché to describe something as a “hidden gem” but the term definitely fits Thy Worshiper. This is a very strong album that deserves a much wider audience than it’s probably going to get.

An absolute pleasure to listen to and one of my favourite finds.