This is the debut album from Danish post-metal band Offernat.

Morrow are a UK-based doom/sludge/crust band. This is their latest album.

This is one of those releases that will likely infuriate those who like music that’s easily classifiable. According to the band, they’re emo crust, and I can see why they’d say that. In my opinion, describing Morrow as a d-beat influenced crust band may be superficially correct in some ways, but there’s so much more than that going on here. They have a cello END_OF_DOCUMENT_TOKEN_TO_BE_REPLACED

Dead to a Dying World are a Blackened Doom band from the US and this is their second album.

Featuring a wealth of instruments and influences, this is an epic album that lasts 73 minutes and takes the listener on a tour of all of the dark places.

The bedrock of the band’s sound is grim, murky Black Metal; this immediately differentiates them from some other Blackened Doom bands as usually the style is predominantly Doom with added Blackness; here it’s a good mix of two, probably leaning towards the Black Metal side of the equation a little more overall. There’s plenty of serrated Blackened parts to keep the blood pumping.

Elements of Crust, Post-Metal and pure Doom work their magic in among the blood-fed trees of the Black Metal forest in which the music grows. Litany is powerful, wonderful, ambitious and terrifying in equal measure. Taking aspects of bands like Hope Drone, Neurosis, Wolves in the Throne Room, Myrkur, Usnea, Nux Vomica, Bergthron, Lycus and a whole host of others, this is an impressive body of music that brings something different to the table with each track, all within the established framework of the band.

Sharp Blackened screams are juxtaposed with softer cleans, both male and female. Dark growls populate the undergrowth and harsh, rolling shouting stabs in like spikes. Guest vocals appear throughout the album, making the entire performance varied and interesting for the listener.

The overall feeling is one of a refined, sombre misery. Viola and other instruments give the music an additional air of sophistication and Dead to a Dying World are nothing if not accomplished at the spells they weave; the band are adept at creating thick atmospheres and dark moods.

The recording has a sickly, unnatural warmth to it, like something alive that shouldn’t be. It’s soft when it needs to be and roiling, churning and destructive at other times.

This is a long, involving and emotive listen that builds, crests and waves through the six tracks like a dark tsunami, crushing and destroying yet followed by calm and retrospection, reflecting on all that has been lost.

Nux Vomica’s latest, self-titled, album is one giant mass of quality. No need to say more than that. You should go and get it. So without further ado let’s find out a bit more…

I’m Just Dave, vocalist and percussionist. Not familiar with my band? Check us out here:

Give us a bit of history to Nux Vomica.

We’re a punk band who learned how to play better, so now people call us “extreme metal”, which is appropriate considering how much Mountain Dew some of us drink. We started in Baltimore in about 2003, moved to Portland in 2006, had some lineup changes ending in 2008, and here we are. Our 3rd LP is out now and we have a slew of other releases. For the last year we’ve taken time off to work on other projects, and our guitarist Chris had a baby. This year we hope to get back to jamming and playing shows! 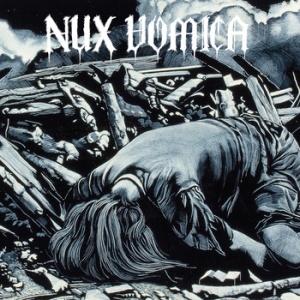 We wanted to agree on anything. Since that was obviously not gonna happen, we figured we’d cram our songs full of so many ideas that they became almost 12 to 20 minutes long. Then we had to figure out how to put it all on an album that sounded cohesive. 5 years later, it’s out!
Are you happy with how it turned out?

Yes we definitely are. I think all the hard work and time we put into it is very apparent. No part of any song went unscrutinized by us. We got very meticulous about how we wanted everything to sound, and some of us went back in the studio multiple times to re-record parts. In particular the extra percussion was an issue. Trying to do what we do live sounded like a clusterfuck, so we scaled down the extra drumming. I think it turned out great.

“Sanity is for the Passive” is about the idea that being labelled “insane” to me means you are reacting correctly to your surroundings in this world. Being labelled “sane” means you have been successfully assimilated into the insanity. “Reeling” is about a guy I knew who almost drank himself to death. People had to break into his house and take him to detox. Empty vodka bottles were littered everywhere. I’m pretty sure he is drinking again these days. “Choked at the Roots” is basically my theory on how people started down the path to being power mad ruiners of everything. Overall this is very dark album lyrically. Read all the lyrics here:

Usually one person has an idea of the entire song structure and brings the riffs to practice and we all pick it apart and build on it. We rarely have a plan of the length of a song, we just let it grow and if it starts getting boring we start scrapping parts and re-working others. We spend a good deal of time on transitions between parts. We like to the longer songs to flow well and remain interesting. We try to avoid the typical “this part ends, the guitars bring in the next riff, everyone else joins in” way of writing punk and crust songs. The lyrics for these newer songs were largely written at practice while the band was jamming. That was because the songs started getting too long and complicated to just bring a bunch of lyrics I wrote and fit them in like I used to.

We have about four new songs, and we were working on more last year before we decided to take a break. The newer batch of songs are more thrashy and shorter than this LP, and people were really into them when we played em live. We also started playing a WAKE UP ON FIRE song that was never recorded. I think once we get back to jamming we’ll see where we’re going beyond that.

What’s next for Nux Vomica?

Practice! We haven’t played in a year. We need to re-learn our songs, shake off the cobwebs and get back to it. I think we’re ready.

Nux Vomica are from the US and play Sludge/Doom.

The songs are long and the guitars are heavy and raging, for the most part at least.

There is a healthy Crust influence to the Metallic Sludge that the band play, which gives them an extra vitality to their sound. The recording is clear and warm with a solid sound that lets everything come through the speakers just right.

The vocalist is savagery incarnate and seemingly a very angry man. He screams bloody hatred over the electrifying Metallic storm that is raging around him.

Nux Vomica certainly have anger and hatred in spades, but they also have the ability to play more restrained and considered sections, which makes the dynamics of the songs so much better than if they were just pure aggression.

This has the anger and brutality of Metallic Hardcore/Crust tempered with the epic soundscapes of the Post-Metal elite. The result is a tour de force of exciting music that should appeal to any Extreme Metal fan.

This is superlative stuff.