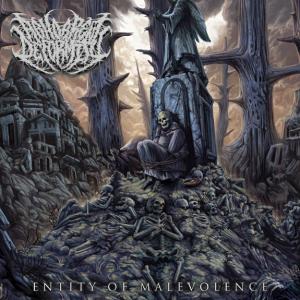 This is the début album from US Brutal Death Metal band Abhorrent Deformity.

With an album cover that lets you know exactly what the band are going to sound like, Abhorrent Deformity proceed to brutalise you with 35 minutes of powerful USDM for fans of Cannibal Corpse, Suffocation, Deeds of Flesh, Dying Fetus, Defeated Sanity, Severe Torture, etc., as well a s touch of a more modern approach to some of the riffs, somewhat akin to Molotov Solution.

Savagely deep grunts are unrelenting in their vocal attack. The singer has a classic Deathgrowl that’s quite satisfying and utterly guttural, (say that five times fast).

Entity of Malevolence is ugly, brutal, full of blast beats and has just enough chug-and-squeal to be pleasing without getting boring. I imagine that some may have had their fill of this style and might want more from a Death Metal band in 2015, but it’s hard to complain when the band stamp a boot on your throat and knife your insides.

These songs use a good combination of speed and heaviness with which to beat the listener into submission. It’s music that’s not for everyone by any means, but then Brutal Death Metal never is. If you favour the style though, Abhorrent Entity play it with a purity and honesty that I haven’t heard in quite a while.

Definitely one for all fans of brutality, everywhere.

This is the third album from US Technical/Brutal Death Metallers Incinerate.

With a quality Death Metal album cover, this is the kind of band that it’s easy to like. Once the usual pointless intro is out of the way, we get lots of brutally satisfying USDM-esque carnage with plenty of chugs and squeals to keep fans of the style happy.

This is a well-oiled Death Metal machine that chews you up and spits you out with a mechanistic relish.

Ultra-guttural vocals are the order of business although some variation is added by some screaming. They hit the spot nicely.

The playing is precise and surgical, with enough technicality to please and enough straight-ahead brutality to satisfy.

If you like your Death Metal in the classic US vein then Incinerate have what it takes to scratch that deep, bloody, sore itch. 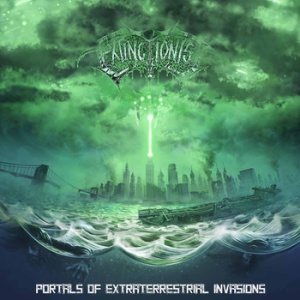 This is the second album from German Brutal Death Metallers Extinctionist.

The recording is clear and strong, with everything sounding crisp and tight. The sci-fi theme does them no harm either, and interludes like Selection sound genuinely malevolent.

Deep, guttural vocals ride alongside the heavy music. The growls are just a shade or two above pignoise, (mainly), and the singer sounds totally committed to the cause.

The songs are largely short and to the point; this is about battering down all defences and causing as much destruction as possible in as short a timescale a possible. The band make good on this threat too.

This is enjoyable Brutal Death Metal that will groove, chug and blast its way into your collection.

Close off the portals and prepare for extinction.

Decimation are from Turkey and this is their third album. They play Brutal Death Metal.

Is it wrong that I knew I was going to like this album as soon as I saw the album cover? No? That’s okay then…

This is Brutal Death Metal at its most devastatingly direct. They have a Technical Death Metal side to them but it’s the raw brutality that makes up the lion’s share of their sound. There’s something timeless and eternally gratifying about Death Metal like this. Sometimes I just can’t get enough.

If you think that a mixture of bands like Suffocation, Insision, Defeated Sanity and Nile would make for a good listen then you’d be right and Reign of Ungodly Creation is the album for you.

The songs are tight, condensed balls of ferocity and blasting destruction. They’re not interested in taking prisoners that much is clear. They rip, tear, chug, blast and flail their way through over 37 minutes of prime brutality and long, complicated song titles.

The vocalist is a guttural beast who sounds like he chews on souls for snacks. With a deep growl that’s instantly satisfying his is a voice that’s easy for any Death Metaller to get on board with.

Decimation boast a strong production that sounds like granite has come to life and started crushing cities. There’s something hard and immovable about their sound yet it’s also imbued with life and doesn’t sound stunted or lacking in energy.

Well I have thoroughly enjoyed this album. With lots of heaviness, energetic riffing and blasting mayhem what’s not to like?

Time to get decimated. 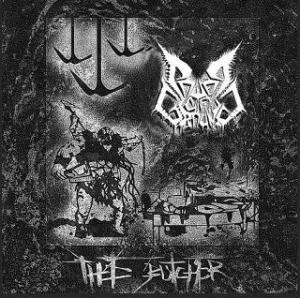 Power of Ground are from Bangladesh and this is their début EP. They play Technical Brutal Death Metal.

Here we have aggressive Death Metal played with passion and with an ear for a good riff. This is a brutal release with a flavour somewhere between Old-School and a bit newer.

The production values are quite raw, but this is only a début release so that’s okay. It’s not a bad sound though, it just needs filling out a bit in my opinion.

The songs themselves though are nasty slices of visceral Death Metal with a good trade-off between technicality and ugly brutality; similar to a band like Dying Fetus in the sense that they can sometimes juxtapose the two, but they don’t really sound like them overall. I’d say they mix a bit of Dying Fetus with elements of Severe Torture, Defeated Sanity, Infant Annihilator and even a bit of old Hypocrisy in the slower parts.

I like that the band have a lot of ideas and are clearly hungry for this style of music. It sounds fresh and ready to kill. There are a lot of good riffs here and these generally congeal into decent songs.

The vocalist is impressive and talented; screams, growls, pignoise grunts – it’s all here. The vocals are one of the highlights for me, ranging from extreme Death Metal growls to Grindcore-style, unhinged shrieks. Great stuff.

This is a very promising start for Power of Ground. So what do we want next? If they improve on their recording a bit and continue to write interesting and engaging songs like this then their debut album should be a great listen. I can’t wait to hear what they do next. 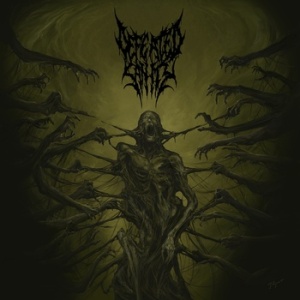 This is a case study in brutality from the get-go. First track Initiation – from the title and the fact it’s only 1:15 long I was led to assume it would be some typically disposable intro that so many bands have, but I couldn’t have been more wrong. It is, essentially, a Deathgrind song and it’s a great way to start things off.

Defeated Sanity play the technical and brutal sides of Death Metal very well, and I especially enjoy the Cryptopsy-esque drum/bass moments, fancy breaks and general riff-chuggery. The Jazz-Death is strong with this one.

The vocalist does a great job gargling with broken glass, and I hope he’s recovered from the blood loss of creating such guttural sounds.

They have a good clear production that allows you to actually hear the bass, (which they make ample use of), and the drumming is an exercise in flawless precision. The two instruments work together to form an integral and essential part of the songs and are every bit as important as the thickened guitars and the bestial grunts.

A top-quality release from a band who have enough experience and know-how to excel at what they’re doing.