Vermin Womb are a blackened sludge/grind band form the US. This is their debut album.

Due to my love of their first EP Permanence, as well as all things Primitive Man and Clinging to the Trees of a Forest Fire, (who they share members with), this release has been highly anticipated by yours truly.

This is the debut EP from UK grindcore band Unyielding Love.

Unyielding Love play ultra-extreme dark, blackened grindcore, and they sound pissed. This is noisy and littered with feedback and chaotic delivery.

Mix Discordance Axis, Nails, Full of Hell, thekevorkiansolution and Labrat together and you’ll be in the right filthy area. END_OF_DOCUMENT_TOKEN_TO_BE_REPLACED

Stheno are a blackened grindcore band from Greece. This is their début album.

I like Stheno. Their split with Grassroll introduced me to their blackened grinding ultra-violence, and I’ve been hooked ever since.

So, joy of joys, we now have a full 20 minutes of their nasty savagery to enjoy, and enjoy it we do. END_OF_DOCUMENT_TOKEN_TO_BE_REPLACED

This is the début album from the mysterious collective that is Dead in the Manger.

Dead in the Manger play a curiously unusual mix of Depressive/Funeral Black Metal and Blackened Grindcore, as ably showcased on their début EP Transience.

On this latest release the band continue with their exploration down the path lass travelled, (never travelled?), that they started on Transience.

The juxtaposition of Depressive melody and harsh Blackened Grind is still not something that’s common and by all rights it shouldn’t work, but Dead in the Manger take a hitherto largely unexplored sub-genre that probably hardly anybody else is usually bothered with, let alone covets, and make it fully their own.

A harsh Black Metal ambience and general negatively-charged melodicism are created by the band only to then smash it into a mutated, bastard Grind template that results in songs combining both atmosphere and aggression.

It’s like someone has taken Shoegaze Black Metal and given it some real backbone.

So has their sound progressed from Transience at all? Yes; I’d say that the Black Metal component is more prevalent on Cessation, although that could also be due to the fact that they’ve learned to incorporate beauty and brutality at an even deeper level on this release. There’s also more mid-paced sections where the band demonstrate that not only can they create an evil atmosphere but they can maintain it.

In order to get something like this right you really need to know what you’re doing, and Dead in the Manger have proven that their first release wasn’t just some fluke. Cessation is even better.

A highly recommended listen. If you haven’t done so already you need to discover Dead in the Manger.

Oh, and the band logo and album cover? Fantastic. 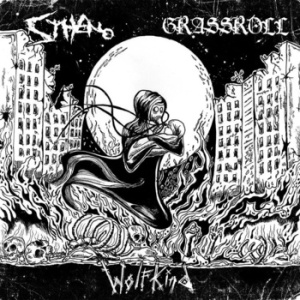 Stheno are a Blackened Grind band from Greece.

They start this split off with just under 7 minutes of Crust-fuelled terror the likes of which will have most people running for the hills. It’s underground, brutal and terrifying.

The vocals are savagery incarnate and come off completely unhinged; serrated growls that don’t sound even vaguely human. Crikey. Sharp high vocals occasionally cut through the meat of their sound too but it’s the deep vocals that do it for me.

The songs are very energetic and I like how it’s not all blasting; the band pace themselves well and give a very aggressive display without resorting to Grind-by-numbers.

These short songs hit the spot and the Blackened Crust influence in the riff department is a welcome change from the Grindcore norm.

A very enjoyable few minutes of ultra-violence from Stheno.

Grassroll are also from Greece and play Grindcore with a dash of Sludge. They contribute just over 6 minutes of fast, insectile Grind to the split.

The singer has a voice that’s so high and maniacal as to sound scarily barbed. Her vocals scar, maim and lacerate. Deep growls occasionally punctuate the tracks but for the most part it’s static-like screams, reminiscent of Discordance Axis. Overall it’s the opposite of Stheno really, who mainly use the deeper vocals.

There’s a slight Sludge hint to their sound in some of their riffs; enough to perk the interest but not enough to detract from the pure demented aggression of these songs.

Grassroll like to play fast and hard, and who can blame them?

Short and to the point, this is a worthy split between these two bands. Both contributions are different enough that the songs on this split are obviously by distinct bands yet their shared base genre allows them to complement each other well.

This is one split to check out for sure.

Inhabiting the same degraded, run-down pay-by-the-hour hotel as The Meatfückers; Isacaarum are more at the Grind/Death end of the spectrum than the aforementioned band, but no less seedy and porn-obsessed for it.

The 9 songs that span this 30 minutes of depraved Metal never get stuck in a rut. In fact, for the genre this is a surprisingly varied release with even some melodic moments raising their rubber-clad heads at appropriate intervals.

The vocals alternate between higher and lower shrieks/grunts, (in a similar vein to, say, Exhumed), with the deep growls in particular being very well done.

A strong production with a heavy sound accentuates all of the questionable fluids that the band excrete and allows their songs to breathe and enjoy themselves while being mindful of the safety word at all times.

I have enjoyed this album immensely; the band have an ear for a good song and the album doesn’t get stale. This is the first time I’ve encountered Isacaarum and I’m very glad I have. I’ll be visiting them at their seedy hotel more often in the future.