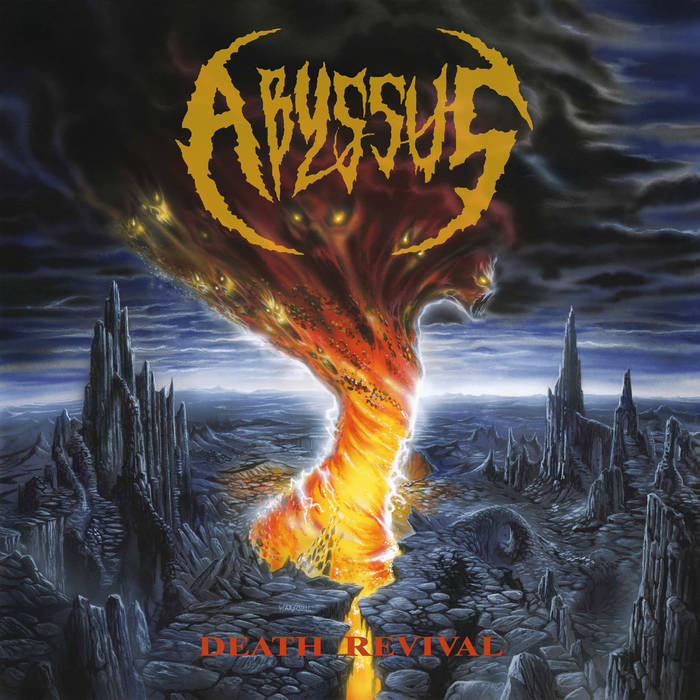 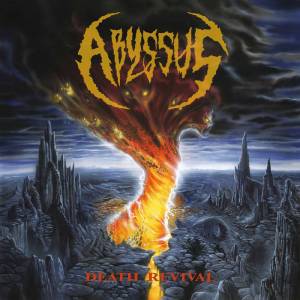 This is the second album from Abyssus, a Greek death metal band.

I’ve been an avid follower of Abyssus’ work for many years, (see here, here, here, here, and here), and their output never fails to put a smile on my face. Which is why it’s great to have a new album from the band. Seven tracks, 33 minutes; Abyssus bring their old-school death metal sound to the masses once more, and it’s damn good fun. END_OF_DOCUMENT_TOKEN_TO_BE_REPLACED 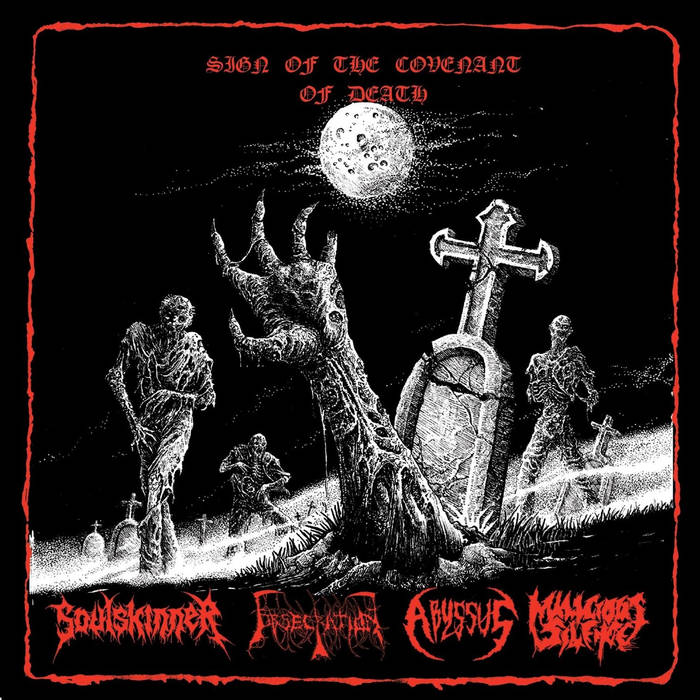 This split is between four death metal bands – Soulskinner, Obsecration, Abyssus, and Malicious Silence, all of which are from Greece.

Oh, what a sickeningly horrible feast of underground death metal we have for you here! Each band has two tracks, and each band gives a good accounting of themselves. END_OF_DOCUMENT_TOKEN_TO_BE_REPLACED 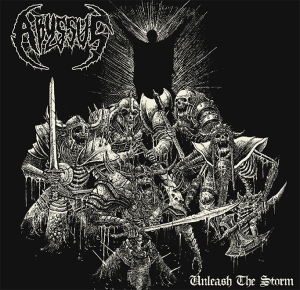 Abyssus are a death metal band from Greece and this is their latest EP.

I’m a huge fan of Abyssus. Their old-school death metal just really, really does it for me. Have a look at this, this, this, and this. Top band. END_OF_DOCUMENT_TOKEN_TO_BE_REPLACED 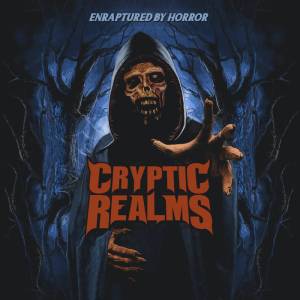 This is the debut album by Cryptic Realms, a death metal band with members from various countries.

Featuring the singer of Abyssus, (one of my favourites), I was keen to see what Cryptic Realms had to offer.

Here we have classic, old-school death metal, played with a purity of intent and grim authenticity. Taking cues from END_OF_DOCUMENT_TOKEN_TO_BE_REPLACED

Harm are a German death metal band and this is their second album.

It’s been a few years since Harm’s 2013 debut album Cadaver Christi first landed like a high-explosive shell, and since then we’ve been hungry for more. Well, wait no longer, as Harm are back.

Greetings!! I am Panos Gkourmpaliotis, the guitarist of Abyssus, an old school death metal band from Greece. Abyssus formed in 2011 by the vocalist Kostas Analytis, just to glorify the Metal of Death!!! I entered the band in 2012 and Kostas Ragiadakos (bass) joined us in 2015. Abyssus is just our passion for 80s and 90s Death/Thrash Metal.

Give us a bit of background to Abyssus

After the release of our first EP “Monarch to the Kingdom of the Dead” (2011) it was about time for the band to have a solid line up. We played some live shows and we recorded a few split releases (No Life in the Coffin with legendary Nocturnal Vomit in 2013 , “From the Abyss Raised the Morbid” with mighty Morbider in 2014 and “Obscure” with Slaktgrav in 2014). The songs included in the split with Morbider were remixed and remastered because we were completely disappointed with the sound of that release. The result was “Summon the Dead” in 2014 , an EP released only on tape. For many years we were giving final form to our style. In 2015 we entered Unreal Studios, one of the best studios in Athens and we recorded our début album entitled “Into the Abyss” (released in 2015 via Memento Mori) and some split releases that already came in 2016 and some others that will follow soon.

This period am listening to Rapture’s début album called “Crimes Against Humanity” and “Ways of Enclosure” by Dementia 13. Both are great albums! Don’t forget to bang your heads with “Exterminate!! Annihilate! Destroy! by Down Among The Dead Men. Hail to Dave Ingram , one of the best Death Metal vocalists ever!!!! Bow to none!!!!

Give us a bit of background to Once Entombed… – as a collection of your older work, how did this release come about?

Memento Mori and Κunal of Transcending Obscurity cooperate on album promotions. So we met him! Transcending Obscurity celebrates with us and honours our first days with “Once Entombed…”, a compilation that shows the evolution of the band through the years. Most of our early releases are difficult to find, so it is a good opportunity for someone who wants to get in touch with that stuff. So far our collaboration with Transcending Obscurity has been more than excellent. Kunal is a metal maniac and we couldn’t be more satisfied with the result !!!

How do you go about writing your songs – has this changed over time?

Me and Kostas Analytis write our own stuff and then we shall get in touch to play to each other the new ideas.. We are partners in crime!! Until “Summon the dead” Kostas Analytis was the main composer of the band and I had less responsibility on that material. That was something that changed after “Summon the Dead” so to speak , as and I am responsible for the biggest part of “Into the Abyss”.

To me, your EP Monarch to the Kingdom of the Dead is stylistically and sonically different to what came after – what prompted this?

Our first EP “Monarch to the Kingdom of the Dead” released in 2011 and as I talked, when Abyssus began to act was just an one man band. As it is logical Kostas Analytis had a different view from me. But we found a common path somewhere in the middle and this is the so called evolution of Abyssus from “No Life in the Coffin” till now.

What’s your favourite song on your début album and why?

My favorite song off “Into the Abyss” is “Echoes of Desolation”. It’s probably the most “epic” song on the album , so to speak! The one that evokes more emotions and makes you get into a different kind of dimension.

What does the future hold for Abyssus?

Right now we are working on new material! Very soon our début album “Into the Abyss will be released on vinyl format via Floga Records and a 4-way split on 7” vinyl, with Death Courier / Slaughtered Priest / DreamLongDead. Also we’d like to play live our music in the near future , as two years have gone since our last live performance!

And finally – how ace is Death Metal?

After a long time that passed from the glorious 90s, prevailed mediocrity in all genres of metal music!!! As Asphyx said on “Deathhammer”, pollution begins!!!! Decades after, we see the streams of great releases coming out one after another and we are really excited about that. We believe that Death Metal must remain pure and old school as it had begun!! We respect and we admire so many legendary bands that kill again and of course new bands that defend the old sound with passion and true inspiration! Hail true Death Metal. 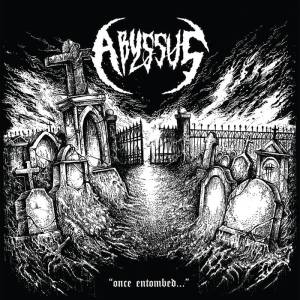 Abyssus are a Greek Death Metal band and this is a compilation of their older work.

Now this is the stuff! Ever since I heard their extremely good Split with Morbider, I’ve been a fan of this band. Then their début album Into the Abyss raised its ugly head and I was hooked.

This compilation pulls together their split with Slaktgrav, the aforementioned split with Morbider, their split with Nocturnal Vomit, and finally their 2012 EP Monarch to the Kingdom of the Dead, with two Death and Slayer covers tacked on the end. All of which makes for 55 minutes of old-school Death Metal heaven.

If you haven’t encountered Abyssus before, (why not?), then they play Obituary-inspired old-school Death Metal that’s just so very more-ish that as soon as you stop listening to them you can’t help reaching for the play button once again. Abyssus sound good and that’s all there is to it really.

Presented in reverse chronological order, this is essentially taking a trip back in time with the band, back through their discography. Their style hasn’t massively changed, but you can tell that they have progressed if you know what you’re looking for. With each release they get just that little bit tighter and more focused, just that little bit more professional in delivery and in the recording department.

I’d say that Monarch of the Kingdom of the Dead is the biggest departure from their normal sound here, which makes sense as it was their first release; these songs have more of a Swedish Death Metal influence and sound than the rest of their work, as well as a slightly more modern, polished delivery style. It’s all relative of course, but it’s noticeably different from the rest of the material here. It’s still good, but it’s the weakest part of the release, and I’m glad that after this they progressed, (regressed?), their style somewhat into the old-school institution they are quickly becoming.

Overall this release gets a giant thumbs up from me. Stick it on and get ready to uncontrollably groove yourself into the ground, as when Abyssus play you just can’t keep still, it’s just not done. 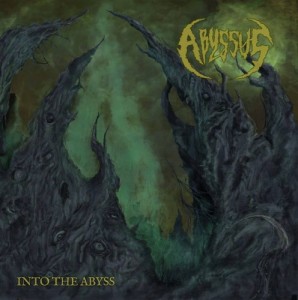 This is the début album from Greek Death Metallers Abyssus.

I’m familiar with Abyssus from their Split with Morbider, and I have to say that I enjoyed that release quite a lot, from both band’s perspectives. So when this album from Abyssus popped into my inbox, I immediately prioritised it.

Abyssus play Old-School Death Metal with a strong Obituary influence, which is not something that you hear too often when compared with bands that take their influences from other Death Metal greats. Even the singer’s voice seems moulded by Obituary, with a similar kind of tone and style apparent.

This may be Obituary-worship in some ways, but it still has its own charms and Into the Abyss boils along at its own pace causing destruction and death wherever it travels.

The songs are simple, atavistic paeans to 90s Death Metal, with the recording values following suit. It’s a pleasing collection of tracks that makes a good impression with its honesty and authenticity. There’s nothing flashy or new here, but that’s resolutely not the point. This is 39 minutes of enjoyable and pleasurable Death Metal that makes no grand claims and simply revels in the bloodshed.

This is a split release between Death Metal bands Morbider and Abyssus.

Morbider are up first. They are from the Czech Republic and play Death Metal inspired by the Swedish Old-School, although I can also hear the songwriting skills of a bit of Avulsed in their style as well.

They contribute 4 tracks to this release and they’re all solid slabs of well recorded, well played Death Metal with a nice chainsaw sound and plenty of atmosphere; the mid-part of No More Life is a case in point. Good ideas and good execution; Morbider impress.

Abyssus are from Greece and play a more primitive and darkly primeval version of Death Metal than Morbider, with even a bit of a proto-Thrash influence.

They contribute 5 slightly shorter songs to the split, one of which is a Sodom cover. The songs are simple but effective, with an Old-School feel and the obvious passion to back it up. The riffs are ripping and have a good feeling to them and the band Thrash along at a welcome speed.

A very enjoyable split from two good bands. Check them out.