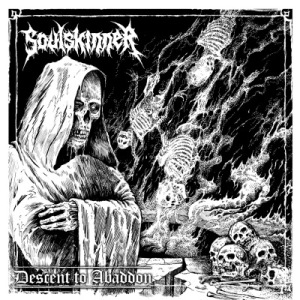 Soulskinner are a Greek death metal band and this is their fourth album.

I very much enjoyed 2014’s Crypts of Ancient Wisdom, so I’m quite the happy bunny to hear some new material from Soulskinner.

Thankfully, the high quality death metal that the band did so well on their previous album is still intact on Descent to Abaddon, and I’d even go so far as to say that they’ve managed to improve on themselves in fact. Stylistically they’re the same, it’s just that the songs and general compositions of the tracks are just that little bit better.

I love how Soulskinner manage to effortlessly capture the sheer visceral joy of listening to death metal. There’s something so enjoyably atavistic about their music, but without it coming across as stuck in the past or too backwards looking. Essentially, I suppose, it’s because they play such a timeless, classic brand of death metal and, crucially, they do it so well.

Once again the band have produced an enviable collection of tracks. Alongside the rampant heavy riffs and brutality, they still find the time to unleash macabre atmospheres on the listener too. Various paces and moods are employed to really get into the listener’s skull, whether this is furiously aggressive speed, carnage-causing mid-paced groove, or a stalking, malevolent slow-and-heavy doom-chug. Whatever they get up to, they do it very well indeed.

Some quality leads and solos add to all of this, enhancing the rhythm guitars and adding extra depth and interest to the songs. Yep, it just goes to show that there’s more to Soulskinner than just aggressive barbarity. These are death metal songs not only delivered with force, but also a dark, malignant soul.

The vocalist is on fine form once more. His ugly guttural growls seem dark enough to swallow lives as he roars across the tracks like something possessed. His voice is the ultra-satisfying cherry on the deathly cake, and his performance does the music justice.

Soulskinner have returned, better than ever, which is saying something considering how good they already were. Descent to Abaddon is an album of hideous delights and pure death metal slaughter.