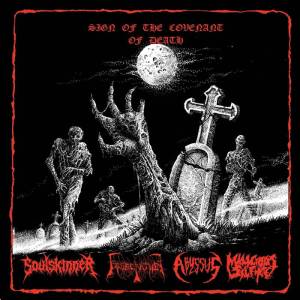 This split is between four death metal bands – Soulskinner, Obsecration, Abyssus, and Malicious Silence, all of which are from Greece.

Oh, what a sickeningly horrible feast of underground death metal we have for you here! Each band has two tracks, and each band gives a good accounting of themselves.

Soulskinner contribute 9 minutes, and start us off with a bang with God of the Deep. I’m already a fan of Soulkinner’s work, and this just reinforces my feeling that whenever I hear them I just really enjoy them. Influenced by the old-school and infected with groove, melody, and a sense of songcraft, it’s a thoroughly decent song and a great way to start this mammoth split release. Creation of Cosmos is twice as long as God of the Deep, and initially reminds me of something Possessed might do, at least in places. There’s even a hint of Amon Amarth‘s melodic might in some of the riffs, albeit if Amon Amarth were an underground death metal band.

Obsecration offer up almost 7 minutes of cavernous death metal, full of macabre melodies and monstrous growls. R.I.P. (Rest in Pieces) shows off the band’s formula well, while Revenge cements my impression of a band who clearly know what they’re doing with the style. Obsecration peel off riff after riff of deathly goodness, and I particularly like their solos and leads, (especially near the end of their first track). I think I need to check out more from this band. They have a considerable discography stretching back to the early 90s, and I bet there’s some real gems in there.

I like Abyssus a lot, and here they give us almost 7 minutes of material. The band’s Obituary worship is very well-received by yours truly, and never feels like plagiarism. Their songs always satisfy, and first track here Echoes of Desolation is no different. Full of groovy heaviness and twisting melody, the song is a mix of Obituary and Bolt Thrower, and feels like some long lost cut from an obscure 90s compilation tape. The second song is actually an Obituary cover, and Abyssus do it the justice you would expect.

The four-way split ends with Malicious Silence, who have the largest share of the total duration with 11 minutes of content. Like Abyssus, they offer us one original song and a cover, this time of Bolt Thrower. The band’s original song – Seed of Utopia – is a more complex and atypical death metal affair than the other songs on this release. While still offering plenty of brutality, the band use dissonance and technicality to get across their point. This is old-school in a different way to the other bands here; think more along the lines of late-90s experimentation and progressive technicality. A mix of Death, Deeds of Flesh, and Gorguts, maybe? The Bolt Thrower cover is a faithful interpretation of When Cannons Fade, and like Abyssus, Malicious Silence do the source material justice.

A storming split release; fans of old-school or underground death metal should make the time to check this out.