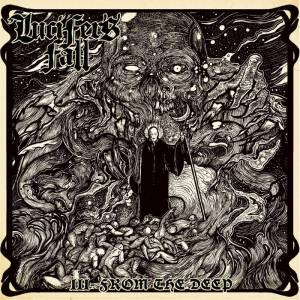 This is the third album from Australian doom metallers Lucifer’s Fall.

I’m a sucker for Lucifer’s Fall. Whatever they do seems like filthy doom gold as far as I’m concerned. If you haven’t already, make sure you also check out their past releases, (Lucifer’s Fall, Fuck You We’re Lucifer’s Fall, II – Cursed & Damned, Tales from the Crypt), as every single one of them is worth it.

Lucifer’s Fall play their traditional doom metal with so much charismatic personality that I fear one day they’re going to just reach out of the speakers and grab me. Their tasty music comes with a side order of heavy metal and just a twist of punk rock swagger too. The album is filled with great performances, and not a single second is wasted on anything other than prime quality METAL!!!

Across 47 minutes of material Lucifer’s Fall once again demonstrate why I hold them in such high regard. The songs are catchy-as-Hell and are covered in hooks; the album brims with monstrous doom anthems. There are a lot of kicking riffs, and the solos and leads really sparkle with dark magic. Of the latter, some of these leads and solos are especially effective and evocative. Combined with a choice selection of the band’s best thick crushing DOOM, I have to say that III – From the Deep probably boasts some of Lucifer’s Fall’s most atmospheric work to date in places.

These new songs are as well-written as you would expect; in fact, I’d argue that III – From the Deep contains some of the band’s most advanced compositions to date. It’s clear that the band have put a lot into this album, and the results speak for themselves. The Cave is a great example, which sounds like a mix of Metallica and Iron Maiden, (largely when both bands are in ballad mode), combined with Black Sabbath and Reverend Bizarre. It’s a sophisticated and well-crafted track. From the Deep is similarly well-composed, only it’s doomier, more epic, and has a touch of Cathedral about it on occasion. Contrast this with the aptly-named Doom ‘N’ Roll, which is short, belligerent, and aggressively wild. It’s as if Motörhead and Reverend Bizarre vomited up a song together. It’s great stuff, like every track here; there’s no filler, and no duds – III – From the Deep is an album of killer tracks all-round.

That last band that I mentioned in relation to the above songs is, in particular, a cornerstone of the Lucifer’s Fall’s sound. It’s a lengthy shadow that Reverend Bizarre cast, but as Lucifer’s Fall flavour their own take on it with a range of other classic metal influences, and their own characterful take on them, these songs stand loudly and proudly on their own merits.

I Love this, it is as simple as that. Lucifer’s Fall are back, and I couldn’t be happier. It’s criminal that this band aren’t far more well-known. If anyone should inherit Reverend Bizarre’s vacant throne it should be Lucifer’s Fall.

One thought on “Lucifer’s Fall – III – From the Deep (Review)”