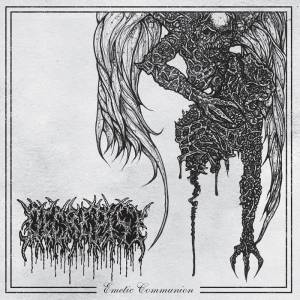 This is the debut album from Decrepisy, a death metal band from the US.

Across 35 minutes Decrepisy play foul, malignant death metal that’s both old-school and timeless at the same time. The band use doom influences well within their sound, and you can hear a thrash metal edge to some of the less-warped and twisted melodies that are sometimes used.

The music is brutal and ugly, but not without nuance or skill. In places, Decrepisy’s music becomes more about dark atmosphere than simple brutality, (although there’s plenty of the latter here too). At these times it’s clear that the band have a real talent for sinister melodies and macabre mood-building.

Each song is well-written and has a wealth of death metal delights sewn into its twitching, rotting hide. The guitars are thick and meaty. They drip with underworld malevolence and crush the listener with a variety of speeds and nasty riffs. There are a multitude of standout moments, whether that’s a catchy riff, an eerie melody, or a foreboding atmosphere.

This is the sort of album that I find very easy to keep returning to. It has good songs, a decent amount of variety within its musical framework, and has plenty to hold your attention once it bursts from the speakers in a spray of viscera and arterial red. Yes, Decrepisy know how to write this sort of cavernous underground death metal, and the five compositions that Emetic Communion consists of make for satisfyingly horrific songs, (the last track is a short an instrumental outro, but rather than being a waste of space like most of its kind, is actually a really creepily effective way to end the record).

This is a monstrous album. Very highly recommended.