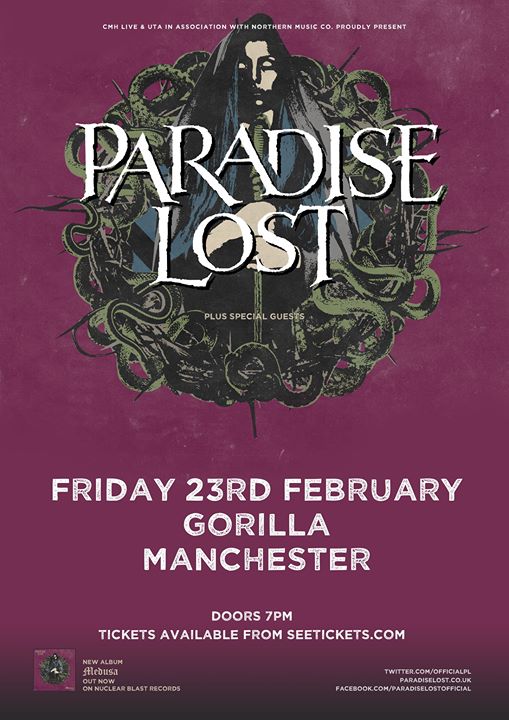 Another cold night in Manchester, and another quality show beckons. Paradise Lost are always going to be a decent draw, and tonight the venue is packed and enthusiastic. 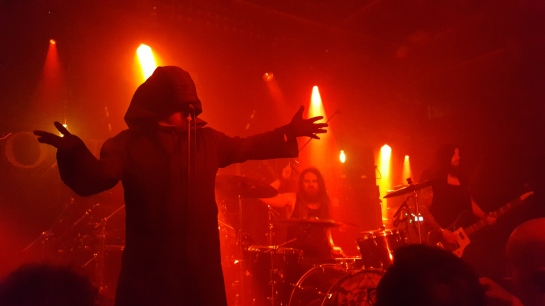 First up it’s the wonderful King Goat. Long songs and a short slot to showcase them in mean we only get an intro and three actual songs, but it’s well worth it.

After the brief intro, (from On Dusty Avenues, I believe), it’s into Doldrum Sentinels, and despite a slightly muddy sound the band’s presence and power is undeniable. Both are off the band’s highly anticipated forthcoming second album Debt of Aeons, which I can already tell you is quite the stunner

Cocooned in what must be a very snug full body outfit, complete with gloves and giant hood, the singer achieves the feat of effectively shifting the focus from himself to just his voice, which essentially sounds just as tremendous as it does on album. Seriously, the guy has an amazing voice. He displays a theatrical and charismatic personality between songs too, which is a welcome change from most faceless frontmen. 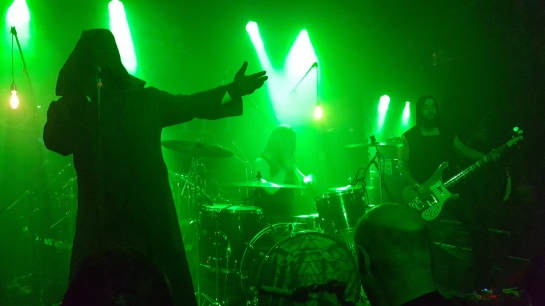 It’s a compelling set, with the band playing the title track from their new album next. The song is a masterfully crafted progressive doom monolith. With atmosphere and dramatic intensity, the music is completely absorbing.

There’s a good turnout considering the early doors, and it’s pleasing that King Goat get a decent audience for their performance. I have nothing but admiration for this band, and the next time they play anywhere near here, I’ll be there if I can.

They end with a rousing rendition of Conduit, and although their set was brief, it was worth coming out tonight just for King Goat. 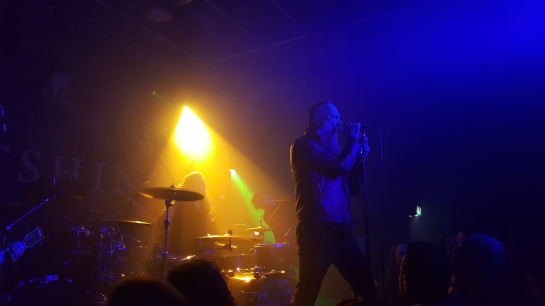 Of course, King Goat aren’t the only band on tonight. Outshine are next and are the only band on the bill that I am completely unfamiliar with. Before they step on stage I didn’t have any real idea of the type of style they play. Of course, in today’s age of easy-access information I could easily have found out, but decided I’d rather be surprised.

It turns out that they play a form of Gothic metal that’s not a million miles away from some of Paradise Lost’s mid-to-late-period incarnations. They do have their own spin in the style, of course, and have more than enough of their own personality to justify their existence, if such a thing were necessary.

The singer seems to have a good voice and the songs are quite personable and enjoyable. It’s clear that they have some decent tunes and even though it’s all new to me I find myself swaying along to them quite pleasantly. I like that the band are obviously into their material too, which is always nice to witness.

The venue is well-populated by this point, and it’s clear the band have their fans in the crowd. The more their set goes on, the more I get into what they’re doing. Songs like Liar, We are Broken, and Leave Now Honey are instantly infectious, and I almost feel like I know the band’s material even on first exposure. Outshine have put on a good show, and I’ll be sure to keep an eye out for their work in the future. 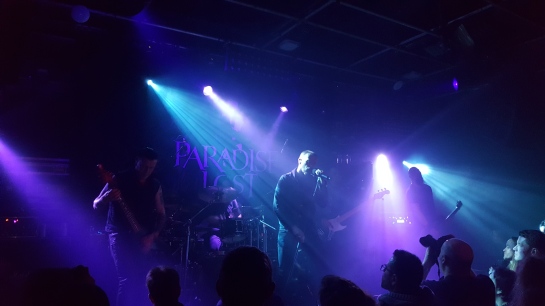 Having semi-recently saw Paradise Lost at last year’s excellent Damnation Festival, I was eager to catch them on this headlining tour of theirs. Medusa is such a strong album that it deserves more of an outing, and with five tracks of it aired tonight, I wasn’t disappointed. Plus, of course, the band have a ludicrously strong back catalogue to plunder too.

Well, the place is packed, and there’s an expectant buzz in the air. After a short changeover period between bands, Paradise Lost seem to be with us surprisingly quickly, despite a little delay to the starting time. Opening with From the Gallows, they’re instantly on fine form, even with some unfortunate sound gremlins that eat some of the guitar and vocals.

The setlist is well-designed, boasting a wide selection of songs both old and new from their eclectic discography. I really like that Paradise Lost aren’t one of those bands that play a handful of tracks from their more recent work and then descend into a workmanlike rendition of a soulless greatest hits set; no, the opposite is true with them, and while there’s a very good selection of eras on show tonight, it’s weighted toward their more recent work. This is a great thing, of course, as it shows how strong all of the band’s material is. Paradise Lost are forever forward-thinking.

The sound improves marginally for Tragic Idol, but by One Second things are sounding, if not perfect, then much better. Cracking song.

The band’s singer is as enjoyably disarming and personable as always. The entire band obviously love what they do, which is always something I enjoy seeing, especially in a band of Paradise Lost’s stature.

Gods of Ancient is up next, and is one of my favourites off Medusa. The live version does sufficient justice to the original.

I wasn’t expecting anything off Symbol of Life tonight, so the catchy and anthemic Erased is a pleasant surprise. Followed by the iconic Enchantment and then the title track off their latest album, it’s impressive how the band blend together music from their sometimes quite disparate eras smoothly and easily. 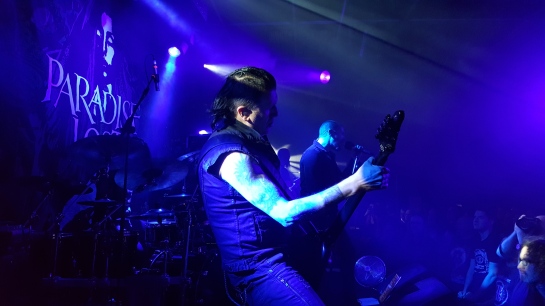 An Eternity of Lies is another top track. Heralded by violins, the song comes to dark life in the hands of its creators.

A brief delay occurs when the singer seems to disappear into the darkness, (technical difficulties?), but it doesn’t last long. Then we’re back into it with Faith Divides Us – Death Unites Us, followed by Blood & Chaos, and both are hideously enjoyable. The latter especially, which really is one of the band’s modern classics.

Speaking of classics, the double tap of True Belief and As I Die is almost too much for a crowd that has already been super enthusiastic up to this point. Wow. I think I need a lie down.

But no, as the band then launch into the colossal doom of Beneath Broken Earth, which ends the main part of their set. After the high energy of True Belief and As I Die it’s a good choice, and the song’s sombre, atmospheric gloom is strangely uplifting, compelling, and empowering. The crowd is happy and the band leave the stage.

If that was truly the end, it would have been a great show, but there’s still more to come. No Hope in Sight is the first of three remaining cuts that the band treat us to. Starting with its distinctive lead guitar, it’s another anthemic modern classic. It boasts a real earworm of a chorus, especially the rasping vocals. Top stuff.

Up next is another song off Medusa – The Longest Winter. It’s utterly absorbing all of the way through.

Ending with a the consummate crowd-pleaser that is Say Just Words, this has been one of the best Paradise Lost shows I’ve had the privilege of being at.