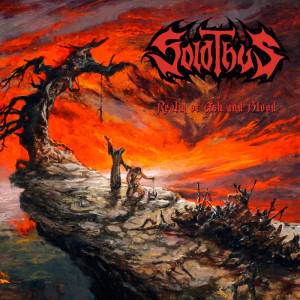 This is the third album from Solothus, a death/doom metal band from Finland.

Soaked with deathly vibes and sinister doom promise, this is macabre death/doom that deeply satisfies with its quality delivery. For a rough approximation of the band’s sound, imagine a mix of bands such as Temple of Void, Incantation, Hooded Menace, early Amorphis, early Paradise Lost, and Bolt Thrower.

As well as these prime ingredients, however, the band’s mid-paced death metal is augmented with traditional doom metal elements. These latter influences are buried beneath tsunamis of richly grim distortion, so that on first listen the main effect simply seems to be on the material’s speed, (or lack of), but once you get used to the Solothus sound you can hear where the band’s hearts lie, (Sleep and Candlemass, I’d guess).

Devastatingly heavy riffs are a near-constant companion throughout Realm of Ash and Blood, and the band use these to help shape songs that are extremely enjoyable. Solothus know how to take the subtle approach on occasion too, adding atmosphere and introspective moments into their crushing assault. Dark melody plays a key part in the band’s sound, acting as the common ground between their death and doom sides, helping to tie everything together neatly.

The singer’s deep growls are added to by piercing screams, and although I like the screams, it’s the sun-swallowing growls that steal the show. Relentlessly malevolent, the vocals are perfect for music like this. The singer’s also the vocalists for the very tasty Sepulchral Curse, so check them out if you haven’t heard them.

Realm of Ash and Blood is a strong album that only grows stronger over time. Anyone with a taste for death and/or doom metal should give this a listen.

3 thoughts on “Solothus – Realm of Ash and Blood (Review)”