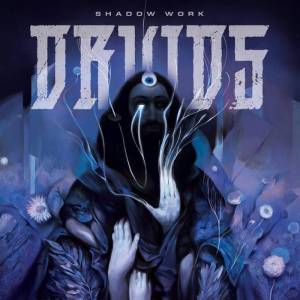 This is the fourth album from progressive/stoner metal band Druids.

After very much enjoying 2016’s Cycles of Mobeum, 2017’s Spirit Compass, and 2019’s Monument, I knew I wanted to check out Shadow Work as soon as it saw the light of day.

With a duration of 50 minutes Shadow Work is easily the longest Druids release to date. This is Druids at their most diverse and wide-ranging, not just musically, but vocally too. Their past work effectively forms the basis for what we hear on this new album, but this has been expanded by a greater range of influences and ideas. Slower and more atmospheric, Shadow Work takes the original stylistic reference points of their old material, (Mastodon, Red Fang, Baroness, etc.), and augments this with newer ones, (Neurosis, Sunnata, Dvne, as well as occasional aspects of bands like Radiohead and Between the Buried and Me, for example).

The music is a progressive blend of stoner, sludge, doom, classic, and psychedelic metal. The band’s new material fleshes out this description with an expansive take on the style, allowing for a greater sense of mood-building and atmosphere-crafting. Druids have taken their increasingly progressive direction and taken it to its logical conclusion. Every song has its own reason for existing, and there are countless standout moments across the album.

The end result of the above is a very satisfying and engaging collection of tracks that take the listener on a journey that they will definitely want to undertake.

Shadow Work is a sterling example of a well-established band pushing themselves to become something greater than they already were. I expected to like the latest Druids release, but not as much as this. Druids have really evolved and impressed. Don’t miss out on Shadow Work.

Essential listening for any fan of the style.