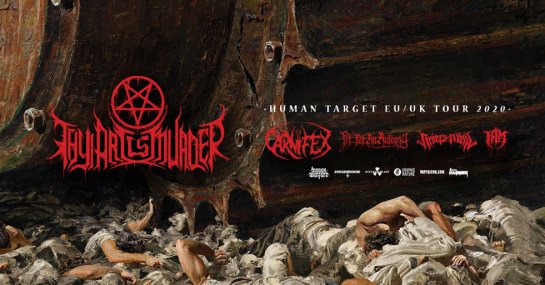 Tonight’s sold out show boasts a strong lineup of modern heaviness and extremity. It’s a show I’m very glad I have got to attend. So without further ado… 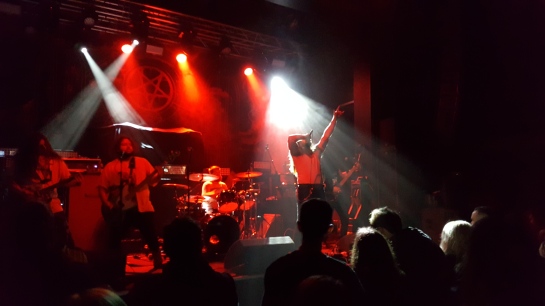 I arrive just in time to catch I Am’s set. I’m only familiar with one of their albums, (Life Through Torment), but they’re entertaining enough regardless. Their heavy, stompy music works well live. They’re also nicely animated on stage, particularly their energetic frontman, who is very endearing.

The breakdowns come thick and fast, as do the chugging guitars, and the hardcore riffs. The band’s sound isn’t half bad either, and I can feel the venue shake as they ply their brutal trade. 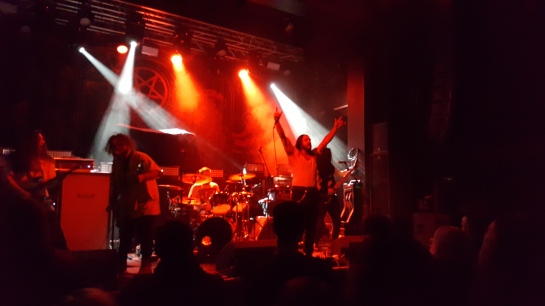 The venue continues to fill as the band plays, but overall they seem to get a favourable response from those that are here. I Am acquit themselves nicely as the opening band. 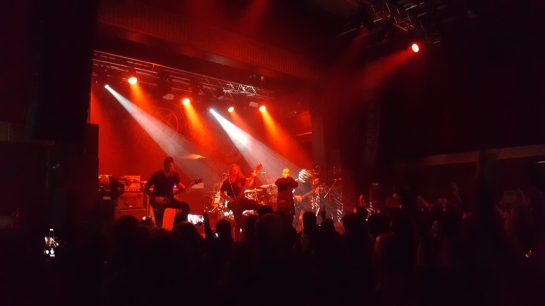 Having caught Rivers of Nihil live previously and enjoyed them immensely, I’m pleased to say that tonight they deliver the goods once again. The band’s modern take on progressive death metal may lose some of its nuance live as they have a slightly uneven sound, (at least initially), but not as much as you might think. Besides, their music may have a reflective side, but it’s still ultimately a version of death metal, and goes down very well.

The singer, looking like some form of cult leader tonight in his chosen attire, is a natural focal point, but I really enjoy watching the drummer and bassist when they get to go a bit crazy on their respective instruments. The entire band gives a good performance, however, and I enjoy their set a lot, especially as Death Is Real is aired, probably my favourite cut of theirs, (during which the singer successfully parts the crowd and inaugurates the first full-on pit of the night). 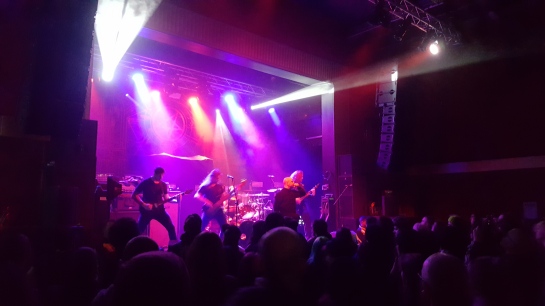 The venue is well and truly busy during the band’s set, with most paying attention to what Rivers of Nihil are doing. The band are not lacking in fans, it seems.

I look forward to catching Rivers of Nihil again in the future.

Fit for an Autopsy 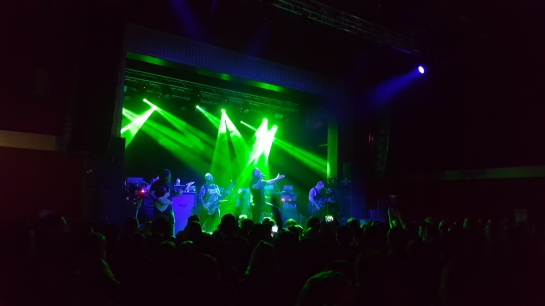 Touring for a monster of an album, (The Sea of Tragic Beasts), Fit for an Autopsy open with the title track of this and immediately everything is on fire. It’s impossible not to move when the band are playing, and they get the crowd all worked up straight away. The band’s thick deathcore grooves and well-placed melodies ensure that their songs are weighty in both distorted and emotive terms. I was curious as to how well the band, (and singer), would handle their more atmospheric qualities live; it turns out they do this very well indeed.

With only 30 minutes to make their mark, each song is a deathcore hit, and seeing the songs live just reinforces how well-written and damn catchy they are. And heavy. Holy crap, the heaviness. 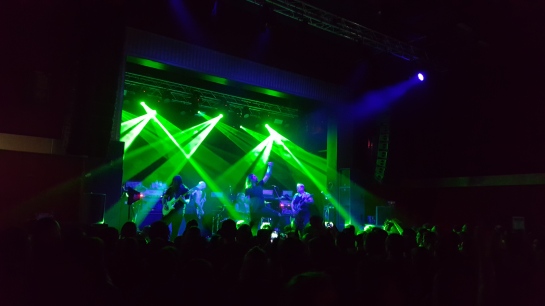 Owning the stage like the professionals they are, Fit for an Autopsy’s set is tight and full of energy. A band like this is built for the live environment, and the crowd respond accordingly. They act like headliners, and are pretty much received as such. 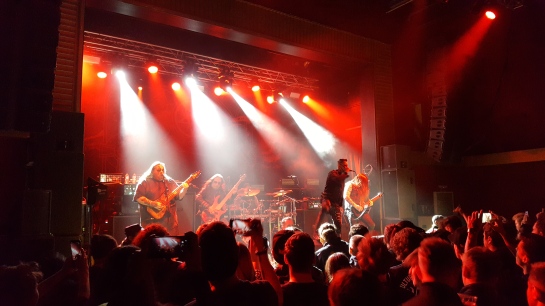 Other than Rivers of Nihil, Carnifex are the only other band playing tonight that I’ve seen before. Expectations are therefore high, and like Rivers of Nihil, the band deliver. Also like Rivers of Nihil, however, their sound is a bit uneven at first. Despite the fact that opener World War X is slightly marred by this, there’s no denying the band’s power. Their songs are just too good to be dragged down by a less than optimal mix.

The sound soon improves however and by second song Slow Death Carnifex are crushing the crowd with their infectious blackened deathcore. Halfway through the track the symphonic elements are turned up too, which definitely helps the band’s cause, and now they’re in their element.

Blisteringly fast serrated melodic parts cut through the airwaves, and when these transition into thunderous breakdowns, Carnifex simply lay waste to the crowd. From where I’m standing it doesn’t seem like many people are caught not moving. A perfect example of this is the lethal Drown Me in Blood, which tonight is so good it hurts. I’ll feel this one tomorrow. Every song just demolishes the stage and crowd tonight though, but that’s definitely a personal highlight. 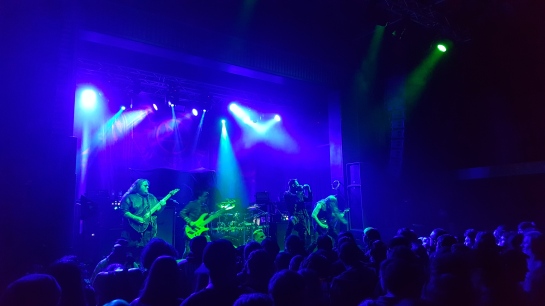 Carnifex are even better than the last time I saw them. In fact, despite really enjoying them last time, tonight was something else entirely. Just wow.

Like Fit for an Autopsy before them, Carnifex both act and are treated like a headlining band.

Thy Art Is Murder 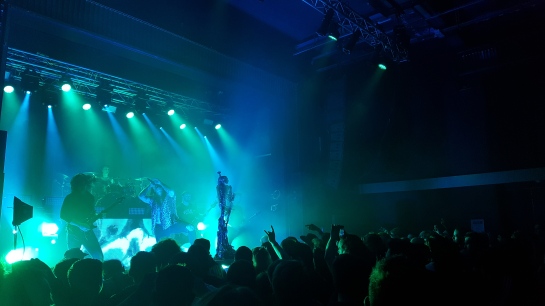 Now here’s the band everyone has been waiting for. Touring on the back of their latest album Human Target, anticipation is high.

Despite the accessible nature of their brand of deathcore, (relatively speaking, of course), Thy Art Is Murder are probably the most straightforwardly brutal of tonight’s acts, largely or completely lacking elements such as progressive nuance, emotive atmosphere, or blackened symphonics. This doesn’t hold them back one iota though, as the band have their own ample talents, and their song-based deathcore causes unstoppable mosh pit carnage. Thy Art Is Murder’s performance is confident and professional, and they have the songs to back up their assured delivery.

Taking to the stage like conquering kings with Death Squad Anthem, the band’s headlining status of this exemplary lineup is confirmed, and the crowd firmly react. Following this up with Make America Hate Again, everyone moves big time. With the best sound of the night, the guitars crunch and the drums punish. The singer reveals himself to be personable and humorous. His voice sounds ferocious too. 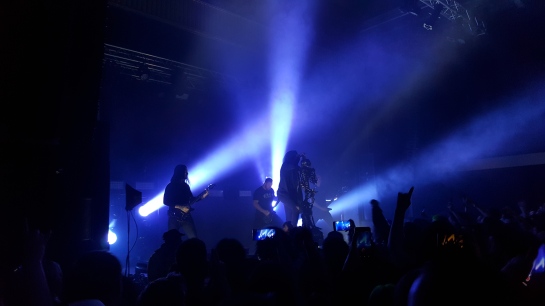 By the time The Purest Strain of Hate hits, I swear everybody in the venue is jumping. And by Human Target we get the first crowd surfer of the evening. Eternal Suffering sees the intensity levels increase significantly with its faster parts, while its slower breakdowns cause pit mayhem.

The next couple of songs hit hard, but after these it’s the potent Holy War, with its slicing lead melody and destructive aggression. This one goes down particularly well, with an eruption of crowd surfers. 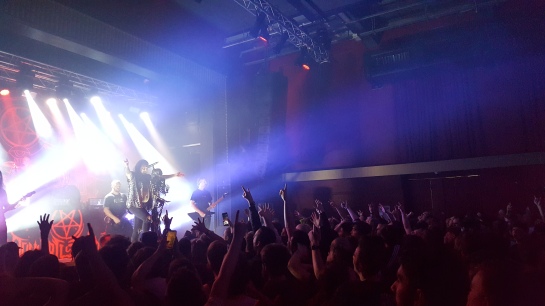 New Gods is a strong cut from the new album that gets an outing, and sounded arguably better tonight than on album. The crowd favourite Puppet Master simply slays. The biggest pit of the evening occurs during the start of Reign of Darkness, and people definitely enjoy this one.

I wasn’t expecting the band to play Chemical Christ, but just like on their new album, they end with it. The first half of the song is good, but from the second half of the song it just transforms into something phenomenal. It’s probably my favourite track from Human Target, so this just floors me.

Thy Art Is Murder give the crowd exactly what they want tonight, and emerge victorious from the melee. If you get a chance to see the band, or indeed a lineup like this, don’t miss it.

5 thoughts on “Human Target Tour – Thy Art Is Murder/Carnifex/Fit for an Autopsy/Rivers of Nihil/I Am – Manchester Academy 2, 26/01/20 (Live Review)”