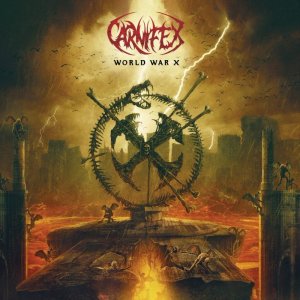 This is the seventh album from Carnifex, a US death metal band.

2016’s Slow Death was a real treat for fans of modern death metal, blending catchy songwriting with blackened melody and orchestration to produce a really enjoyable collection of songs. Although it contained elements of deathcore, as does this new one, Carnifex aren’t really a deathcore band these days – they’re far too melodic and have too much else going on, much to their credit.

On World War X the band continue this successful style, only to extend and expand it. The songs are longer and/or more complex and/or have added layers; not every song has all of these fleshed-out aspects, (some tracks still only just break the three minute mark, for example), but across the album it shows a continued development for Carnifex.

As mentioned above, the songs mix modern death metal and deathcore together to form a base of heaviness. On this the band lavishly add lashings of melody, (from both blackened black metal and death metal perspectives), and added orchestration and keyboards, as well as other other aural enhancements such as solos, electronics, and extra layers of depth. All of these elements are then forged into songs that are more catchy and memorable than they probably should be, and the end result is a sterling collection of extreme metal tunes.

The middle of the album boasts two guests; the singer of Arch Enemy and the guitarist Angel Vivaldi. The latter provides some sterling guitar work to an album that has already seen an increase in solos, while the former helps provide an opportunity for Carnifex to explore a hitherto unseen side of their sound.

Well, I had high hopes for Carnifex after how much I loved Slow Death, and they have not disappointed. World War X is weapons-grade extreme metal, and this album is one of their best.