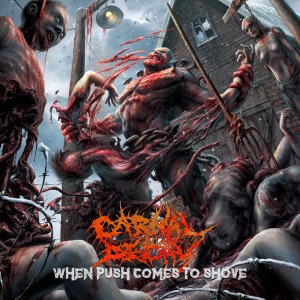 This is the latest EP from Carnal Decay, a death metal band from Switzerland.

After hugely enjoying 2017’s You Owe You Pay, this new 10-minute EP was well-received by yours truly. It’s great to hear more of the band’s crushing modern death metal.

Heavy groove and carnivorous aggression are your constant companions across these three songs. Some of the band’s deathcore/hardcore-influenced proclivities that were felt as an undercurrent on their last album are even more pronounced on these latest songs, particularly on the opening title track. The rest of this song consists of the usual blast and chug approach that makes this kind of thing so effortlessly enjoyable, and it’s a decent way to start things off.

With a guest slot from the singer of Katalepsy on Food for Thought, this next track is a more intense one, with more double bass and blast beats than its predecessor. This is, of course, no bad thing. There’s still plenty of huge groove and deathcore/slam influences to enjoy though, and enjoy we do.

The final song We All Bleed Red blasts out of the gate all fire and fury, taking no prisoners and giving no ground. It’s probably my favourite of the three tracks here, boasting rampant extremity and speed, while also revelling in some crushingly heavy riffs and punishing drums. The singer’s voice and vocal rhythms are at their best on this one too. Very tasty.

It seems that Carnal Decay have embraced a bit more of a deathcore approach on this EP, not only in some of the guitar riffs, but also in the singer’s belligerent growls and shouts. It’ll be interesting to hear where this takes them in the future.

If you’re a fan of such bands as Analepsy, Dying Fetus, Ingested, Vulvodynia, Thy Art Is Murder, and Aborted, then this should appeal to you.