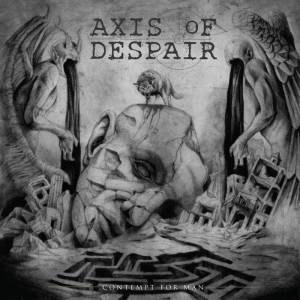 Axis of Despair are a Swedish grindcore band and this is their debut album.

Contempt for Man is the follow up to 2016’s Mankind Crawls, which was ferociously enjoyable and showed much promise for the band’s future endeavours. Well, they’ve now made good on that promise with a beefy 20 tracks of serrated grindcore; 33 minutes of new material.

Despite this being the band’s debut album, Axis of Despair have a lot of collective experience under their belts already. Featuring current and ex-members of groups such as Coldworker, Nasum, Livet Som Insats, and many others, this is a band that know their grind inside out.

Contempt for Man is fuelled by an underbelly of angry punk, and tears through its playing time with an infectious enthusiasm that sometimes only grindcore can display in such a dangerously jagged manner.

The development between Mankind Crawls and Contempt for Man is notable. Although clearly still the same band playing the same style, Contempt for Man is less rough and more focused, more streamlined in delivery. This is still scathing, underground grindcore, of course, so don’t mistake my words for implying the band have somehow gone all ultra-polished and shiny. No, this is nasty, belligerent stuff.

The songs are well-written short slices of grind, mixing the Swedish grindcore style with something like the snub-nosed assault of a band like Napalm Death. Mix this with a healthy dose of punk attitude and crust aggression, and you have an album that’s extremely enjoyable if you’re a fan of this kind of truncated extremity.

Mankind Crawls showed a band with much promise, but Contempt for Man not only fulfils this promise, it exceeds too.

One thought on “Axis of Despair – Contempt for Man (Review)”