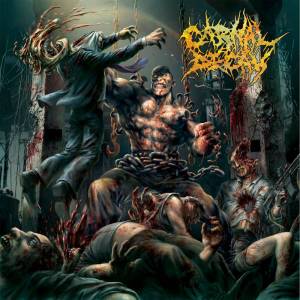 Carnal Decay are a brutal death metal band from Switzerland and this is their fourth album.

I really like the singer’s voice, as he has a timeless kind of death metal growl that sounds just great sitting atop the heavy guitars and precision-cut beats.

Blast beats are liberally sprinkled among the carnage that the band reap, while heavier grooves and huge chugs make up the more mid-paced sections. Both are performed very well and as this is the band’s fourth album it’s clear they know a thing or two about the style.

A vague feeling of hardcore permeates some of the tracks here and there, be that in the form of gang vocals or a certain energy to some of the riffs. Either way, it’s only a small part of their sound, and for the most part Carnal Decay focus on pure, ripping death metal.

The songs have a good flow to them and the band ably demonstrate that they understand death metal dynamics. The compositions have a belligerent emotive quality to them that manifests in sharp melodies and quality riffs. This allows them to transcend mere brutality, connecting with the listener in a visceral way so that they provide a bit more than the simple charms of a one-dimensional slam band, for example. Yes, Carnal Decay have plenty of style, but there’s depth and substance here too.

I hear elements of Cryptopsy, Aborted and Dying Fetus in their sound, which should tell you a little something about the quality control levels on You Owe You Pay.

This is a top-notch death metal release. I’ll be blasting Carnal Decay out for some time to come.

2 thoughts on “Carnal Decay – You Owe You Pay (Review)”