Hivetower are a US metal band and this is their debut EP.

I like this, it has character. On the longer side for an EP, (31 minutes), Hivetower have produced the type of metal album that pilfers willingly from a few different scenes and styles, while still managing to have a personality of its own. END_OF_DOCUMENT_TOKEN_TO_BE_REPLACED

Gürschach are a metal band from the US and this is their debut album.

So what do Gürschach sound like? I suppose if you take a base of classic heavy metal, while mixing in elements of modern, alternative, thrash, and progressive metal, you’ll have a good place to start from. END_OF_DOCUMENT_TOKEN_TO_BE_REPLACED

Almøst Human are from Switzerland and play Metal with a modern, Electronic twist.

This is well-recorded and has a solid sound. The band have a late 90’s/early 00’s vibe to them that recalls bands like Spineshank, Mudvayne, Downthesun and Mnemic, only updated for 2014 and with keyboard/electronic effects added in.

This is not a style that I hear too much any more but Almøst Human are convincing and this is an enjoyable little release. The songs are longer than you’d expect for this style, which allows the band to develop the themes and feel of the songs without rushing them or purely focusing on mosh-friendly sections or what not.

These are good songs and I like the focus on developing a completed feeling rather than just stringing several riffs together with a chorus. Almøst Human appear to be attempting to pick from the rotten corpse of Nu-Metal; they aim to take what so many liked from the style and leave what made it so disposable. I’m pleased to say they have largely been successful in this regard and Ø is a comprehensive and enjoyable release.

This means that we have ended up with a heavy, modern Metal release with added effects/electronics that has a lot of enjoyable melodies. This vocalist shows himself to be a very capable singer as well as being able to scream when he needs to. 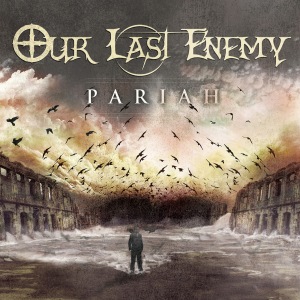 Our Last Enemy play Industrial Metal and this is their second album.

Coming off as a modern Metal band with industrial elements and keyboards the band peddle their aggressive brand of music with passion and fortitude.

If you take all of the heavy bits of early-noughties bands like Spineshank, Slipknot, Downthesun, etc. and take out pretty much all of the clean singing you’ll have a reasonable starting point for Our Last Enemy. Plus guitar solos.

The industrial and atmospheric parts of these songs are more subtle and understated than you might think, the main emphasis instead on the heavy guitars and scathing vocal attack. With enough double bass and blasting drums to ensure the listener knows they mean business, the guitars churn and turn their way through the songs while the singer barks out vicious diatribes.

Each song contributes to the whole and on the final analysis this is an enjoyable album that has a perhaps surprising amount of depth to the compositions.