This is the second album from this Swedish thrash metal band.

Death Rattle are a metal band from the US and this is their second album.

Death Rattle play heavy music that’s a combination of thrash and groove metal. Think of a mix of The Haunted, Lamb of God, and Dew Scented, with a hint of Gojira, for a good idea of where they’re coming from. END_OF_DOCUMENT_TOKEN_TO_BE_REPLACED

This is the second album by Russian thrashers Pokerface.

This is the follow up to 2015’s Divide and Rule, which I liked quite a bit. They’re now back, only with a new lineup which includes a new singer. END_OF_DOCUMENT_TOKEN_TO_BE_REPLACED 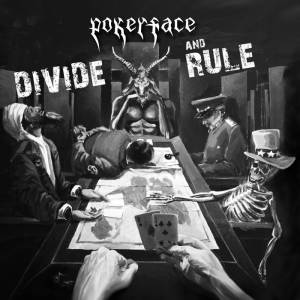 This is the début album from Russian Thrash Metal band Pokerface.

Pokerface play Thrash Metal with a modern sheen that nonetheless takes its cues from the early, aggressive style of the genre. Think a modern take on older Kreator and Slayer via a bit of Dew Scented.

The singer has an impressive snarl that she uses to great effect. She varies her attack and includes higher and lower screams, as well as even the odd bit of spoken-word.

The musicianship is tight and first-rate without being flashy. There are solos aplenty and these are very enjoyable.

The production is strong enough to showcase the band at their best but not polished enough to give them that manufactured feeling. Pokerface are the real deal and Divide and Rule is 36 minutes of ferocious underground Thrash Metal.

The songs are sharp and fast, going straight for the jugular with lethal intent. Songwriting ability is clearly valued highly and there are lots of hooks and catchy moments across these 10 tracks. The songs are well-written and the performance is energetic. There’s a lot of content on this album and the band offer up a meaty feast to be hungrily devoured by Thrash fans everywhere.

It’s really nice to hear this kind of Thrash Metal. In an age where a lot of Thrash bands seem to be take the retro/comedy route, seem compelled to have some form of nonsense gimmick, or blend their Thrash with other styles, it’s great to hear a band like Pokerface who play no-nonsense aggressive music, backed up by talent, skill and confidence.

I could easily imagine this band being snapped up by one of the larger labels and given wider exposure. Let’s hope that happens, eh?

If you’re looking for a bit of satisfying Thrash Metal with good songs and a killer instinct, look no further.

Obedience to Dictator are a Death Metal band from Italy. This is their second EP.

The band have a tight and precise approach to their music, with everything sounding balanced and where it should be.

These songs have faster sections as well as slower, groovier ones. There are some good riffs on these tracks and they’re arranged well, showing that the band have a grasp of songwriting rather than just stringing bits together.

Modern Death Metal meets an older style, settling for something that’s closer to the latter, but with a nod to the former. Dark melodies are sometimes used to improve the tracks and the band show that they are not interested in recreating just one style of Death Metal. The songs are relatively diverse, with quite a few different ideas and themes being explored throughout, all within the Death Metal framework, of course.

The vocals are mainly deep growls, although screams and other vocal effects are used to add a bit of variation.

In their sound I hear bits of Immolation, Malevolent Creation, Suffocation, Morbid Angel and even a bit of aggressive Thrash similar to Dew Scented in a couple of places.

I enjoyed this and look forward to what they might do next.

This is the fifth album from Nuclear, who are a Thrash Metal band from Chile.

Opening straight off the bat with a strong sound, Nuclear reveal themselves to be fast-paced Thrash Metal. Taking cues from bands such as Kreator and Slayer, this is a much more aggressive Thrash than we normally get to see and all the more powerful because of it.

The riffs are tight and sharp, showing a reverence for classic Thrash, but also a personal touch that allows the band to throw in a few different flourishes here and there. The drums pound and never let up, while the bass is actually audible on occasion.

The vocals are angry snarls that are similar enough to the singer of Slayer to sound familiar but individual enough for that to not be an issue in any negative way.

Each of these songs sounds like it’s on fire. There’s a passionate energy that hangs around them like a blaze and it’s so damn hard to sit still when the band are just Thrashing out with passion and style; the tracks are well-written and have lots of hooks.

These days I find I tire so easily of Thrash, as it seems to be largely populated by bands who go the Retro/Old-School/humorous route, and while there’s nothing inherently wrong with that it’s just so easy to become stale playing those styles. Nuclear, however, have reminded me why Thrash, in the right hands, is so damn essential. In a similar way to Alkira, Dew Scented and Algebra; Nuclear are a Thrash band that have gone all out in the aggression stakes resulting in an absolute winner of an album.

Here we have a band who have thrown out all of the nonsense and produced an album that straight-forwardly rips its way through the running time with relish, enthusiasm and above all, talent. This is aggressive, raw and utterly, wickedly delightful.

If you find yourself on the more jaded side of things when it comes to Thrash Metal then I heavily advise you to check out Formula for Anarchy. Maybe it can relight the passion for Thrash Metal in you.

I really can’t say enough good things about this album. Simply check it out and get ready for a wild ride.

Expenzer are a Swiss Metal band and this is their début album.

This is modern Thrash Metal with a sound that’s somewhere between Darkane, Dew Scented and The Haunted. Indeed, the final song is a The Haunted cover.

The songs are well written and done in the classic verse-chorus style. This makes for easily digested Thrash songs that are quite catchy.

The songs are riff-heavy and are full of shredding licks, leads and solos. It’s mainly a heavy assault, but the band do insert the odd touch of melody here and there. They don’t do this often, so it’s noticeable when they do.

Kill the Conductor has a tight production, with all instruments sounding good. The drums pound away and the guitars rage and crunch. The solos have a fluid, flowing feel, which is something I always enjoy.

This is a decent Thrash Metal album that has a workman-like ethic of just getting down to it; no nonsense, no frills. The style works in their favour and Kill the Conductor is 49 minutes of gratifying Metal.

Dew-Scented are a German Thrash Metal band and this is their tenth album.

I hadn’t heard anything from Dew-Scented since their 2002 album Inwards, which was a good album to Thrash along to. As such, I was keen to catch up with them 13 years later.

Anyhoo, in the interim it seems that little has changed in the grand scheme of things. Dew-Scented still offer high-octane, spiky Thrash Metal and once again I’m more than happy to lap it up.

With a crisp, heavy production, the band tear through 55 minutes of chunky, aggressive Thrash, (including covers of Solstice and Repulsion songs).

This is a very riff-centred album. The songs are collections of hungry Thrash riffs, artfully threaded together into paeans to Metal. Ripping Thrash is the bedrock of their sound, but more emotive guitars provide some depth where needed. The band use melodies to their benefit; frequently subtle affairs, they’re used to enhance the feelings of a particular passage or section.

Guitar solos are plentiful on Intermination and I always love a good solo. This is a very guitar-oriented album and the songs just satisfy.

The vocals sound better than ever. The singer’s voice is aggressive and brutal, barking out the lyrics with angry abandon.

It’s good to hear Dew-Scented again. It also reminds me of why I enjoyed Inwards so much. I’d say that on Intermination they have tightened everything up; the added experience they’ve notched up over the years means that this is a highly focused album from a band that know themselves very well.

As heavy, aggressive Thrash Metal goes, this is definitely a winner.

Divine Zero come from Germany and play Death Metal. This is their second album.

Divine Zero have a singer that alternates between deep growls and high shrieks, sometimes within the same sentence. It’s schizophrenic and harsh. The high screams have a bit of At The Gates about them and both styles sound top quality.

Ostensibly a Melodic Death Metal band, Divine Zero have enough brutality in them to satisfy fans of harder Metal also. It may be melodic but it’s also aggressive.

The songs have plenty of tasty riffs and the trade off between melody and brutality is handled well, with even a smidgen of Thrash being thrown into the mix. Everything’s played to a high standard and there are lots of things included to hook the listener and capture the attention.

The riffs are interesting and quite varied, with everything between modern Metal and Old-School Thrash having a look-in at various points. I also like that the solos are bountiful and emphatic.

A strong sound rounds off a strong package and Divine Zero have produced a very enjoyable album. It reminds me of turn-of-the-millenium Metal like Dew Scented and Withering Surface.

If you’re put off Melodic Death Metal as you think most bands who play the style sound watered down and/or too commercial then give Divine Zero a listen, you won’t be disappointed.