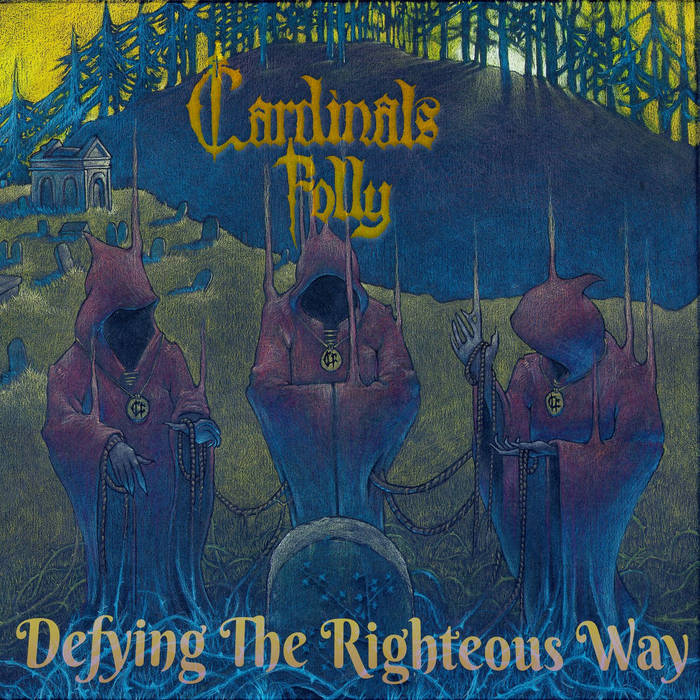 Cardinals Folly are a Finnish doom metal band and this is their fifth album.

I have a definite soft spot for Cardinals Folly, and I’d recommend the likes of Our Cult Continues! and Deranged Pagan Sons to anyone who enjoys charismatic doom metal with larger-than-life vocals. Defying the Righteous Way is the band’s latest chapter, and it’s damn good one, worthy of inclusion in the Cardinals Folly saga. END_OF_DOCUMENT_TOKEN_TO_BE_REPLACED

Cardinals Folly are a Finnish doom metal band and this is their fourth album.

I have a certain fondness for Cardinals Folly’s second album Our Cult Continues!. This was basically an hour of fuzzy traditional doom metal which had plenty of character and personality. END_OF_DOCUMENT_TOKEN_TO_BE_REPLACED

Cardinals Folly are from Finland and this is their second album of Traditional Doom Metal.

Trading in the type of Traditional Doom from the likes of Reverend Bizarre and 40 Watt Sun, they mix this blueprint with a bit of character and personality, Cathedral-style.

Cardinals Folly start the album off with a nice slow burner of a song Chant of Shadows before moving into Morbid Glory which introduces us proper to the band’s fuzzy, Old-School style.

Laid back vocals soar over the top of groovy drums and melodic guitar before settling into a nice riff; the theme may be familiar to Traditional Doom fans but the important thing is that Cardinals Folly know their stuff and the songs are enjoyable.

Sometimes the band hit upon a particularly hypnotic piece of dirge and I find myself staring into nothingness, just losing myself in the song and forgetting what I was doing.

Wait, what was I saying?

There is also somewhat of a Black Metal tinge to some of this. It’s probably not intentional, but the slightly scuzzy sound combined with some particular riffs…it’s just a shade of Black but it adds a nice feeling to the tracks when it shows.

This is an album to absorb as a whole; to let it seep and wash over you in waves of Doom.