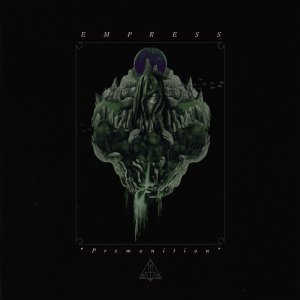 This is the debut album from Canadian doom band Empress.

I enjoyed 2017’s Reminiscence, with its psychedelic grooves and rolling riffs. It set out a strong opening argument for the band, which Premonition now ably capitalises on. Combining elements of doom, sludge, progressive, and post-metal into 49 minutes of expressive, mood-focused music, Premonition is a thoroughly convincing affair.

These songs are built on an emotive bedrock, expanding out with progressive flourishes to form doom/sludge metal structures designed to hold a lot of weight. Empress also use the post-metal build/release mechanic really well, demonstrating a proficiency in a wider range of skills than many of their ostensibly similar peers. This is equally true when you consider that the band also occasionally deploy some hard rock tools here and there, which allow them to kick out the jams quite amiably when they want to.

The band’s progressive doom, sludge, rock, and post-metal influences are used very effectively across this music, with a variety of moods, paces, styles, and textures explored. This allows for comparisons to bands such as Isis, Mastodon, and Yob to all be equally as equally relevant. In fact, although fans of bands such as Yob, Pallbearer, and Elder would be advised to check out Premonition as a priority, any fan of music that builds atmosphere and mood should make sure they check this out, (Isis, Amenra, Pelican, Mastodon, Khemmis, Torche, and others). Empress should appeal to all of these, and have the talent to back up their appeal too.

Premonition is an album that mixes genres with ease and confidence, while also keeping everything relevant within a progressive post-doom framework. I’m a big fan of this album’s impressive music, and urge you to check out what Empress have to offer. This is modern hybrid doom metal of the highest order.