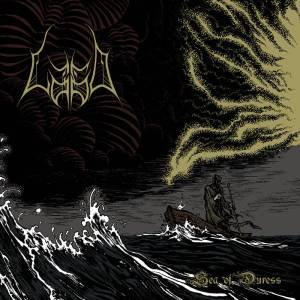 Lago are a US death metal band and this is their second album.

I greatly enjoyed both 2014’s Tyranny and 2016’s split with Calm Hatchery, so I’m pleased to be able to catch up with Lago for their newest album Sea of Duress.

On this latest album the band continue to offer up quality death metal that sits somewhere among the old-school styles of bands such as Morbid Angel and Immolation, while containing elements of more modern groups such as Behemoth and Origin. On Sea of Duress we get 45 minutes of such material.

This blending of classic and modern, replete with a blackened veneer at times too, makes for engaging and meaty music. These eight songs are full of depth and substance, with macabre atmosphere and esoteric appeal. This is combined with a certain amount of heaviness and direct brutality that you would also want from a band like this. It should be noted, however, that although an undeniably brutal and aggressive band, the bulk of Sea of Duress mainly focuses on using death metal as a vehicle for exploring grim, sinister atmospheres and winding, twisting pathways into the darkness.

A lot of the material on this album is dense and oppressive, but although it definitely has an aura of impenetrability in places, it’s not as unapproachable as some of the more purely dissonant acts out there can sometimes be. Having said that, this certainly isn’t easily accessible death metal. Lago make you work for your rewards on this album; not too much, but more than some, and the rewards are worth it.

Sea of Duress is a mature and well-written release showing a band that are increasingly comfortable with their style. Lago seem to be travelling in an ever-complex and dense direction with their music, and this latest album is a further development of their artistic vision. I also like that the band are evolving into a more intricate, nuanced, layered beast. Lago still retain enough death metal ferocity to satisfy the more casual fans, of course, but it’s the more devoted adherents to extremity that will truly get the most out of Sea of Duress.