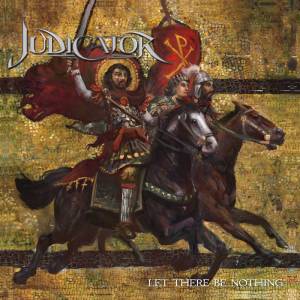 Judicator are a power metal band from the US and this is their fifth album.

Let There Be Nothing is a 60-minute concept album, one that’s epic on scope and ambition. Will this be 2020’s best power metal release? Well, it’s certainly the best one I’ve heard so far, for whatever that’s worth.

Judicator play grandiose melodic power metal, delivered with intelligence and skill. Progressive elements can be heard too; these are relatively minor, but are incorporated into the power metal feast well.

The well-written tracks make a strong impact on first listen, but it’s over time that the real charms of this album are revealed. There has been obvious thought and attention given to all aspects of the material, resulting in songs that stand the test of multiple spins with ease. Judicator know how to write this sort of style, and they do so extremely well.

The music is underpinned with a good understanding of how to use emotive qualities to enhance the impact and longevity of the songs. Judicator’s vision is an ambitious one; its not enough for them to simply write a historical power metal concept album, they also want you to feel what the story and characters portray. This added layer of depth is skilfully weaved into the album, and is ultimately a prime factor in what elevates Let There Be Nothing above many ostensibly similar releases.

Although every band member is a real asset to the band, the singer deserves particular commendation. This is because, for me, the vocals are frequently the weakest link in bands like this; not so for Judicator. The vocals on Let There Be Nothing are powerfully performed, standing strong and proud atop the well-delivered Blind Guardian-Meets-Iron Maiden-meets-Iced Earth music. Judicator have the full package.

This is an album of quality metal, and it’s hard not to become absorbed in it. Any fan of heavy or power metal should check this out as a priority and make this an essential listen.