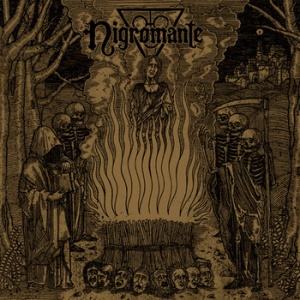 From Spain, Nigromante explode from the speakers with some classic NWOBHM-style Heavy Metal and a big two-fingered salute to all around them. This is from the same record label that gave us the brilliant Funeral Circle album, and I have not been disappointed with this release either.

Nigromante have a great sound and that’s energetic and organic. The songs are concise and full of classic Metal shapes and solos the likes of which are seldom heard these days. That the first track is called Heavy Metal Age should tell you everything you need to know.

These tracks are rocking, galloping specimens of prime-time Heavy Metal which may be from the present but is rooted firmly in the past.

The vocals will probably be an acquired taste for some, but for me it’s a nice change from what I was expecting. They have personality and character; not a million miles away from Lee Dorian of Cathedral in fact in places. This singer has a rougher set of lungs than the more Power Metal norm and this gels with the tunes the band bang out – think more Jon Oliva than anything more Euro/Power Metal-centric. It works well.

Black Magic Night is a top album for anyone looking to relive the classic early Metal sound with a strong professional recording and catchy, enjoyable songs. The album creates the right mood right from the get-go and hopefully we’ll be hearing more from this band in the future. Give them a spin. 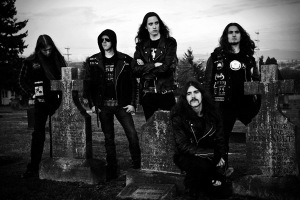 For people who haven’t encountered you before, how would you introduce your band?

Hello, Pilgrim here. Thanks for the interview.

To answer your question – We’re a bunch of guys from Canada playing Epic Doom Metal.

Your début album is incredibly well-developed for a first release – how did the writing of the songs come about?

Thank you, I’m glad you think so! As for the song writing itself… Some of the songs were written exclusively for the album, others were written when we first formed back in 2006 and refined over time. We write songs through different means, there’s no set formula. Either a band mate will have something partially or completely written and then we’ll go from there, or we’ll just build something together from scratch during rehearsal.

What are your main influences for the band?

Off the top of my head I would say quite a diverse range of classic sounding metal bands like Black Sabbath, Saint Vitus, Mercyful Fate Isole, Solitude Aeturnus, Candlemass, Pagan Altar, Iron Maiden, Judas Priest and Solstice. Those were the bands that really helped us go in the Epic Doom direction when we first started off back in high school. Since then we’ve incorporated influences from more great bands and traditional folk forms of music over the years.

What are you listening to now and would like to recommend?

I’m all over the map right now, always listening to the metal classics and lots of progressive rock. Too much to recommend!

However, quite a few albums and EPs from this year are in heavy rotation as of right now. Here’s what I’m digging as of the moment – highly recommended and great records!

Procession’s To Reap the Heavens Apart, Atlantean Kodex’s The White Goddess, Argus’ Beyond the Martyrs, Borrowed Time’s debut, Gatekeeper’s Prophecy and Judgement, Cromlech’s Ave Mortis, In Solitude’s Sister, Tribulation’s The Formulas of Death, Bolzer’s Aura, Grave Miasma’s Odori Sepulcrorum, Blood Ceremony’s The Eldritch Dark, Dread Sovereign’s Pray to the Devil in Man… I’m really straining myself here, there are so many more. An insane year for heavy metal music across all genres.

Do you pay much attention to what is happening in the rest of the Doom scene?

I really try to as well as the rest of the metal scene(s) as well, but not as much as I used to. Life is particularly busy right, and right now I seem to be spending a lot more time catching up with my responsibilities to boring stuff like work when I really want to be writing music or catching up on this huge pile of records that doesn’t seem to stop growing.

But! People need to pay attention to Canadian comrades Gatekeeper and Cromlech when it comes to epic heavy and doom metal! Outstanding bands.

What does the future hold for Funeral Circle?

New releases is for certain, but we also have some plans we are going to announce in the near future… follow us on our facebook page http://www.facebook.com/funeralcircle and we’ll divulge everything in the near future!

It’s very close, Heaven & Hell is one of my favorite albums of all time, but the first 6 Black Sabbath albums for me are just untouchable… I’ll need a few eons to think about this.

Cheers and thank you once again.