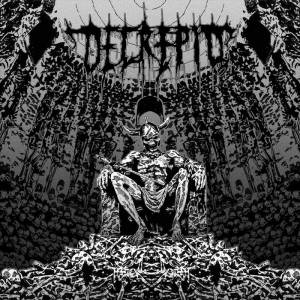 Decrepid are a UK Death Metal band and this is their second album.

This is Death Metal for all of the purists out there. It’s Old-School in nature and takes a good influence from USDM greats like Cannibal Corpse, Morbid Angel and Deicide, as well as elements of UK legends Desecration.

Featuring a decent sound and plenty of good riffs, the songs on Osseous Empire make an immediate impression. The combination of well-thought out guitars and Death Metal heaviness makes the album an easy listen to anyone familiar with the style.

The songs are very rhythmic and riff-heavy, with the band seemingly conscious of the necessary ingredients for a working, holistic song rather than just a collection of guitar parts.

Leads and melodies are few and far between, although solos are included to add colour and spice to their attack.

The vocals are deep growls that are extremely satisfying in their delivery. The singer’s performance is faultless and there’s even the odd scream included to add flavour.

If you’re a fan of Death Metal then it’s hard for me to understand how you wouldn’t like Decrepid. I suppose if all you care about is the ultra-modern, ultra-brutal, ultra-fast or ultra-technical then they might not be for you, but if you like well-constructed songs that have all of the components of timeless, Classic Death Metal then Decrepid are an excellent choice.

This really is an impressive album. Undeniably Old-School without sounding stale or irrelevant, Osseous Empire has massively impressed me with its charismatic songs and atavistic Death Metal personality.

One to get hold of immediately.