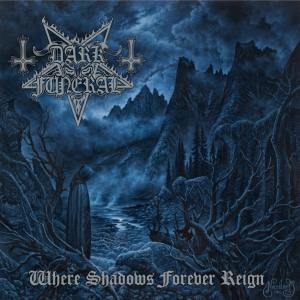 This is the sixth album from this Swedish black metal institution.

With a new lineup, (including a new vocalist), this is the first Dark Funeral album in seven years, and it lands with the impact of a swinging broadsword.

Make no mistake; this is Dark Funeral as you know and love them, and they’re back in full flow.

Where Shadows Forever Reign is fast black metal in the Swedish style, with razor sharp riffs, pounding blast beats and dark melodics. The songs are every bit as catchy and memorable as you would expect from Dark Funeral and it’s the kind of album I can happily listen to once more right after it has finished.

The music is played at a blistering speed, with blackened melodies seemingly torn out of space with ease, as if the guitarists were some kind of mystical soundweavers rather than mere musicians. These tracks are compelling, involving and capable of cutting the unwary to ribbons with their bladed assault.

This is not to imply that it’s all lightning-speed blasting and little else; the band know how to pace themselves where necessary, and slowing down is something that they do on occasion. Songs like As I Ascend and Temple of Ahriman are the perfect example of this, with their crawling malevolence and atmospheric auras. Back to back, these tracks act as a form of centrepiece for the album, with the faster tracks either side.

The new singer fits in perfectly with the band’s overall style and aesthetic. His screamed rasp is of the timeless, classic variety and he instantly sounds at home in this environment. I have no complaints here at all.

I’m not sure what I was expecting, really, but I don’t think it was for Where Shadows Forever Reign to be this good. I mean, it’s Dark Funeral; it was never going to be awful, but I’m floored by just how enjoyable this actually is. It’s the kind of album that’s just effortlessly satisfying. Stick it on and get lost in the speed, dark delivery and black majesty of Dark Funeral.