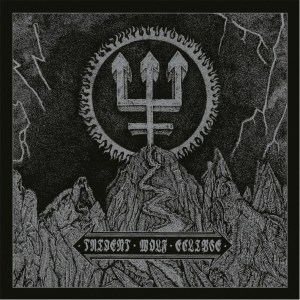 This is the sixth album from Swedish black metallers Watain.

Trident Wolf Eclipse sees a stripped back Watain, with only the most lethal and virulent parts exposed to the world. This album finds the band lean, raw, and hungry for blood.

Featuring a direct blackened assault on the senses, this is a blistering collection of tracks that firmly set out an aggressive and unholy manifesto for Watain. Resplendent in strident, second-wave fury, the songs are full of primordial momentum and scathing bite.

The tracks have numerous riffs and guitar parts that seem dark enough to suck all light from the world, while streaks of esoteric melody and harsh screamed vocals strike out from the nefarious distortion like predators to be feared. Atmosphere and mood are used well, but sparingly; this is all about going for the throat with extreme prejudice and a killer instinct.

There’s something dangerous and atavistic about this album. The band definitely acknowledge the roots of the style, while also forging ahead with icy confidence and determined violence.

Trident Wolf Eclipse is a pure unadulterated black metal treat. It’s not an album that I was expecting from Watain, but based on the quality levels here, it’s one that I wholeheartedly embrace.