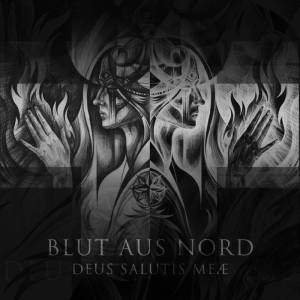 Blut Aus Nord are a black metal band, (among other things), from France. This is their twelfth album.

Blut Aus Nord are a well-known band with a well-known proclivity for experimentation and producing music that’s as unexpected/unpredictable as it is rich, dark, and textured.

On this latest release they have put together an album of blackened delights that seems to span almost every style they have dabbled in over the years, but without being beholden to any of them. As well as the blackened base of the songs they also include elements of other types of extreme metal, such as death, atmospheric, psychedelic, industrial, avant-garde, experimental, and doom metal.

In the face of this diversity of delivery, (which is rendered flawlessly smoothly, holistically-pieced together, and effortlessly naturally by the band’s considerable talents), all you can really do is sit back and absorb it all, as it washes over you like a plague of intelligent, sentient darkness.

Discordant riffs, industrialised beats, inhuman vocals, dissonant rhythms, infernal blast beats, twisted melodies, and warped sounds and keyboards all congeal together to create sickening atmospheres and dark moodscapes. As Blut Aus Nord are dab hands at this by now, the results, as you can imagine, are both effective and harrowing. These songs mark the psyche and burn the soul.

Blut Aus Nord continue to redefine black metal and show what a versatile style it can be in the right hands. Although no doubt operating from suitably blackened foundations, this is a work, (like many of theirs), that moves beyond the confines of the parent genre into into more rarefied realms, ones distinctly less-travelled and usually dominated by a handful of bands at most. In this particular realm, Blut Aus Nord are the undisputed masters and sole operators.

Deus Salutis Meæ is a journey to be experienced and savoured over and over again.