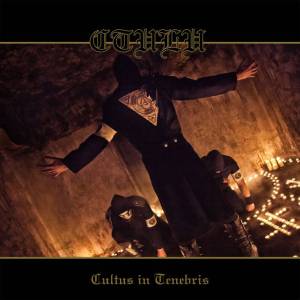 Ctulu are a German black metal band and this is their latest EP.

Between 2011’s Sarkomand and last year’s self-titled album, Ctulu showed great progression. On this latest EP the band have continued to develop and refine their sound, unleashing 19 minutes of sophisticated, well-written black metal on the unsuspecting masses.

One of the things that impressed on their last album, that continues to do so on Cultus in Tenebris, is the band’s capacity and skill in combining fast, second wave-influenced black metal with a more sophisticated, atypical, and varied delivery. Ctulu have a knack for producing riffs and guitar parts that sound out of the ordinary, while still managing to sound perfectly at home in the blackened framework that they have chosen for themselves.

The band are pushing themselves further this time too, with some additional elements of classic, epic, and progressive metal finding their way into the songs in places. These are subsumed into the larger blackened style, so sound naturally placed and perfectly at home in the band’s furious assault. Each song is a self-contained entity, fitting into the whole, but definitely having its own identity and style, taking liberally from any sub-genre they feel like to create their own mood and atmosphere.

Ctulu have once again shown that they can seamlessly craft engaging black metal while also adding in influences from other styles to enhance their core delivery. Cultus in Tenebris is a very enjoyable slab of blackness from this talented band, and I can’t wait to hear what they do next.

One thought on “Ctulu – Cultus in Tenebris (Review)”