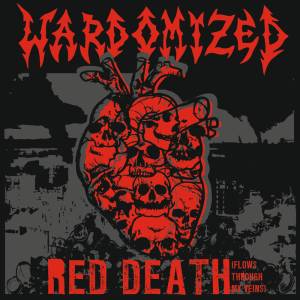 Wardomized are a UK death/thrash metal band and this is their second EP.

From the moment the EP starts you’re left with no doubt about the old-school pedigree of Wardomized. They seem to have instantly managed to nail down a sound that’s been torn from the 80s, both from a recording point of view and also a stylistic one.

This is a thoroughly old-school approach, but one that somehow manages to sound as if it’s still got some energy left in it yet. Across the release we get a mix of various different styles and influences, all tied together by the band’s passion and talent.

Some examples to illustrate this then – so I hear some of Sepultura‘s early violent thrash in the EP for sure. There are some tasty doom moments here and there too, ones that wouldn’t be out of place on Paradise Lost‘s first album, for example, but also elements of Incantation and Bolt Thrower on occasion. There’s a mouldy, crushing Autopsy avalanche of nastiness now and again. Bits of Death, Obituary, and Napalm Death here and there…Maybe the odd Crowbar riff too…

I should clarify though – the above band references are all mixed together into a holistic mass that works really well, and rather than coming across as plagiarised, the music on this EP is merely influenced and reminiscent of these bands, rather than copying and diluting them.

This EP really is pretty damn good. Wardomized have managed to capture and channel the spirit of old-school extreme metal into almost 20 minutes of enjoyable songs. It won’t appeal to everyone I’m sure, as there will be those that can’t get on board with the atavistic, primal style, as well as those that probably dismiss them as not relevant in 2017. Bah, their loss. Wardomized have impressed with their character and songwriting on Red Death (Flows Through My Veins). The songs have a primitive stomp-and-destroy appeal that can’t be denied.

One thought on “Wardomized – Red Death (Flows Through My Veins) (Review)”