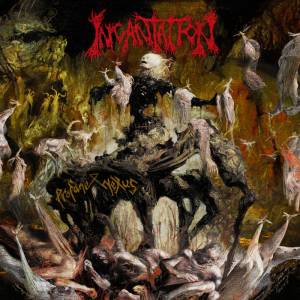 Incantation are a legendary US death metal band and this is their eleventh album.

Pioneers of combining death metal’s fiery intensity with monolithic doom influences, Profane Nexus is the sound of a band that know exactly what they need to do to put out a great death metal record, and then just get down to the business of doing it.

The music is brutal and punishing, no matter what speed the band play at. Whether it’s blast beats with psychotic leads, or slow, drawn-out heaviness, or macabre atmospheres created with sinister intent, the overall effect is one of mentally and physically crushing the listener with pure death metal brutality.

There’s more than just that heaviness and aggression here though. Incantation seem to be able to effortlessly craft songs that have a terrible grandeur to them, as if they’ve somehow discovered a set of occult riffs that are more than just musical expressions. Beyond just being merely brutal or crushing, it’s that feeling of grim, otherworldly atmosphere that I find most appealing; sometimes this is made blatant by the band’s incorporation of an atmospheric section or a moody melody, but at others it’s simply something that’s baked into the very essence of the music, whether it’s blazing by in a chaotic fury, slowly steamrolling over everything, or just unleashing some choice riffs.

There’s actually a lot going on across this album, and each of the eleven tracks has its own direction and character that’s explored with vigour and skill. Also; how Incantation manage to fit everything into songs that aren’t actually as long as they can sometimes appear to be is beyond me. A great example of this is Incorporeal Despair – this is essentially an atmospheric funeral doom song that sounds like it lasts a lifetime, but is actually on for only a little over three minutes.

Profane Nexus is an extremely solid and impressive addition to Incantation’s extensive discography. Compelling and crushing, this is a release that shows most younger bands how it’s done in no uncertain terms.