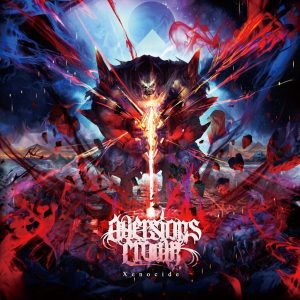 Aversions Crown are a death metal band from Australia. This is their second album.

This is modern, sophisticated death metal with haunting atmospherics that accompany the relentless brutality. With a science fiction theme that provides an overarching story for the album, Aversions Crown spend 50 minutes telling a brutal and engaging tale.

The band shatter the remnants of deathcore, bursting from its bloated corpse with enthusiastic aggression and melodic hatred. With groove, bounce and furious blast beats, the album would be a fearsome proposition if this was all that it had to offer. Unexpectedly though, there’s even more going on here.

Not content to be just heavy and fast, the band have also imbued these songs with a dark extraterrestrial atmosphere that enhances the music with a keen emotive delivery that’s absent from all but the best purveyors of this kind of ripping, modern extremity.

The songs on Xenocide are catchy, memorable and have more barbed hooks than anything this nasty and severe probably has any right to have. Tempering the utter brutality of the songs with sick, otherworldly melodies works very well, and is one of the reasons that I like this album so much. With heaviness, speed and melodic leads all finely balanced against each other, these tracks all make a very good impression.

What deathcore elements remain in their sound are used by the band as they should have always been used all along by the metal scene at large; rather than an offshoot genre of its own, deathcore influences are best used to provide extra dynamics to a death metal core. This is what Aversions Crown have realised and achieved on Xenocide and the entire album shows a band that are willing to take extreme metal to the next level.

The singer has a great voice. Whether he’s screaming or growling his performance is first-rate. He’s backed up by an equally capable band, of course, as all of the playing on Xenocide is top drawer stuff. Merging technicality, savagery and atmospherics, the guitars in particular, (three of them), paint a vivid picture of the no-doubt dangerous vistas that the band want the listener to experience. The drumming is impressive too.

After multiple spins I still can’t get enough of this. I love some modern ultra-brutality at the best of times, but when it’s performed and delivered with such a slick professional package and, (more importantly than anything else), also with an emotive, engaging side, then I’m completely sold.

Xenocide completely destroys in the best of ways.

Somewhere between The Faceless, The Kennedy Veil, Thy Art Is Murder and Carnifex, Aversions Crown should more than satisfy fans of all.