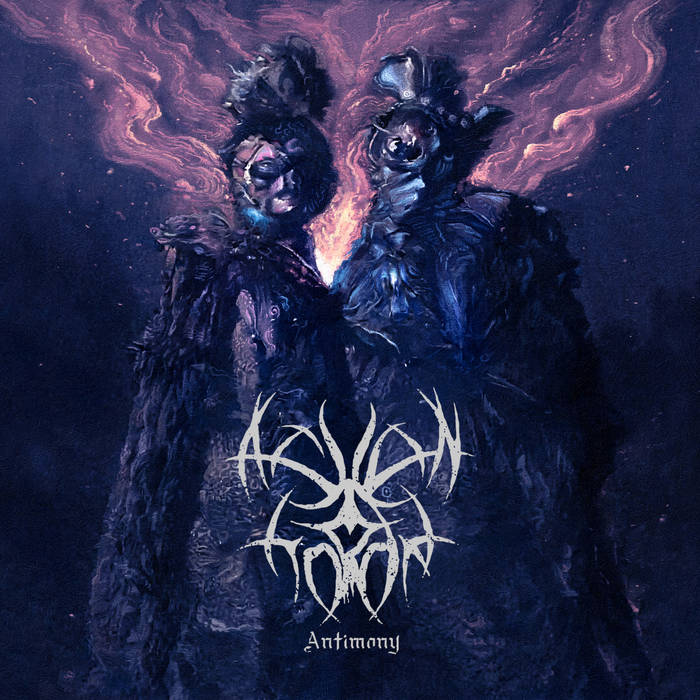 This is the fourth album from US black metal act Ashen Horde.

Ashen Horde boast current and ex-members of bands such as Abhoria, Norse, Somnium Nox, Inferi, Equipoise, and Virulent Depravity in their ranks, and we’ve met them before on Nine Plagues and The Alchemist. Now they’re back with Antimony, a 51-minute vision of gripping extreme metal, (49 minutes without the bonus Therapy? cover). END_OF_DOCUMENT_TOKEN_TO_BE_REPLACED

Escape Is Not Freedom are from the US and play Alternative Metal. This is their début EP.

I like this band. They’re playing a style that’s a bit harder to pigeon hole than most, and I haven’t really heard much too similar to this for a long time.

The band this reminds me the most of is Fudge Tunnel, only with slightly harsher vocals. If you know Fudge Tunnel at all, then it will give you a good idea of Escape Is Not Freedom’s sound. If not, then think slightly-muted and unusual Alternative Metal, done with a Noise Rock background and a raw, underground Grunge influence, before it became a big thing. Add in a few elements of Therapy? at their more Alt-Rock and a pinch of Helmet, and you have this EP.

The songs are a satisfying listen, taking me back to the 90s in many respects. If you’re looking for a few more modern references though, think a less-Sludge version of Kowloon Walled City mixed with a bit of Russian Circles.

The slightly-muted delivery is an interesting one as it is frequently presented by large riffs and energetic guitars, so how they manage to retain that subtlety and understated-edge that Fudge Tunnel did so well is beyond me. It’s partially down to the production, but also the feel of the songs themselves. It’s a very hard-to-achieve juxtaposition, but when done right, it works.

This won’t be to everyone’s tastes, (which is a silly thing to say in many ways, as you could literally say that about any band), but I have enjoyed it; not only due to the fact that it’s a little different, but also just due to the strength of the songs themselves.

If you’re looking for something a little outside of your normal comfort zone, try Escape Is Not Freedom on for size.

Årabrot are from Norway and this is their latest EP. They play Noise-Rock.

I have no idea what’s going on in the album cover, but it’s very striking nonetheless. Combined with the name of the EP, which I love, this is something I was itching to listen to. Having never encountered Årabrot before I was unsure what to expect.

It starts off with Cannibal Manifesto, which is a dramatic spoken word performance. I’m not a fan of this kind of stuff, so this is not a good start.

However, once you get past this pointless intro track and onto the first song proper, Time to Pull the Sticks, things are looking up.

Here we have some charismatic Rock with some nice Therapy?-esque riffs and vocals that carry high performance levels.

The music is Experimental Rock that still manages to be catchy and memorable. The songs have Punk undertones and a nervous energy to them.

I hear elements of bands like Therapy? and Smashing Pumpkins mixed up with their own brand of Rock ‘n’ Roll. There’s even some Progressive Rock influences, especially on the last song It’s Hot Drop It.

Once you get past the first track, this is a very enjoyable collection of songs and is even better than I was hoping for.

Seneron are from Northern Ireland and this is their début album. They play Rock.

Infusing their Rock with Grunge and Punk, Seneron have produced a richly melodic 28 minutes of enjoyable music.

Not wildly dissimilar from fellow Irish bands Therapy? and, (in particular), Kerbdog; Seneron inhabit the same stylistic space as these heavy-hitters. Add in bit of Helmet, Foo Fighters and…yes, Seneron would have fit in very well in the early 90s.

The songs are catchy, memorable and easy to digest. It’s very easy listening, and I mean that in a good way. You can just turn this on and zone out to the infectious melodies. Before you know it, you’re rocking around in your seat and singing along with rawkus abandon. Or something.

The songs are short and sweet, never outstaying their welcome. Parasites and Poets succeeds in being very easy to like and very easy to recommend.

The songs are well-crafted sugar-coated slices of Rock. The guitars are pleasingly loud though and it’s to Seneron’s credit that they’ve given their guitarist permission to add a bit of a bite to his attack. Compared to most of the stuff on this site you wouldn’t call it aggressive, but it’s not a passive, weak delivery like a lot of this type of music thinks it can get away with.