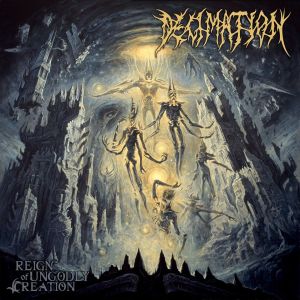 Decimation are from Turkey and this is their third album. They play Brutal Death Metal.

Is it wrong that I knew I was going to like this album as soon as I saw the album cover? No? That’s okay then…

This is Brutal Death Metal at its most devastatingly direct. They have a Technical Death Metal side to them but it’s the raw brutality that makes up the lion’s share of their sound. There’s something timeless and eternally gratifying about Death Metal like this. Sometimes I just can’t get enough.

If you think that a mixture of bands like Suffocation, Insision, Defeated Sanity and Nile would make for a good listen then you’d be right and Reign of Ungodly Creation is the album for you.

The songs are tight, condensed balls of ferocity and blasting destruction. They’re not interested in taking prisoners that much is clear. They rip, tear, chug, blast and flail their way through over 37 minutes of prime brutality and long, complicated song titles.

The vocalist is a guttural beast who sounds like he chews on souls for snacks. With a deep growl that’s instantly satisfying his is a voice that’s easy for any Death Metaller to get on board with.

Decimation boast a strong production that sounds like granite has come to life and started crushing cities. There’s something hard and immovable about their sound yet it’s also imbued with life and doesn’t sound stunted or lacking in energy.

Well I have thoroughly enjoyed this album. With lots of heaviness, energetic riffing and blasting mayhem what’s not to like?

Time to get decimated.