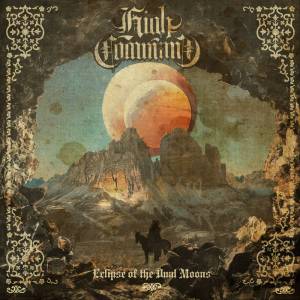 This is the second album from US crossover thrash band High Command.

Coming to us for fans of bands like Power Trip, Cryptosis, and Enforced, Eclipse of the Dual Moons contains 48 minutes of crossover carnage. Thrash metal and hardcore collide with power and finesse, to produce an album that rips and tears through its duration with passion.

As well as the clear love of thrash and early hardcore, elements of classic heavy and death metal can be heard, as well as touches of first wave black metal such as Celtic Frost.

High Command do very well in combining influences from the 80s into eight well-crafted songs. Full of spiked riffs, confident attitude, and developed worldbuilding, the band thrash like maniacs. However, one of the things I like about Eclipse of the Dual Moons is that it offers a well-rounded feast of metallic meatiness. The band know how to peel off brutal heaviness, but they also understand Bay Area thrash dynamics, and pepper their music with a multitude of different creative flourishes all designed to add texture and depth to what could otherwise be quite one-dimensional.

And holy crap do the band have a lot of killer riffs!

Eclipse of the Dual Moons delivers the goods in no uncertain terms. High Command have obviously spent the time studying the greats of yesteryear, and used this arcane knowledge to produce a strong thrash metal album.

One thought on “High Command – Eclipse of the Dual Moons (Review)”