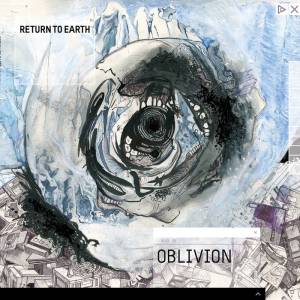 This is the third album from US industrial metal band Return to Earth.

Industrial metal is a rather nebulous and potentially misleading genre tag when applied to Return to Earth. Oblivion is a very diverse and idiosyncratic record, with elements of metal, post-hardcore, industrial, progressive rock, and electronica all present in the music. This is all rolled into an experimental/avant-garde framework that can be both abrasive and emotive.

Featuring an ex-member of The Dillinger Escape Plan/Coheed & Cambria, Oblivion is a richly creative and expressive work, as you might expect. It’s also frequently hyperactive and frenetic. Return to Earth rarely stand still for too long.

The songs are electronically enhanced pieces that all have their own personalities within the band’s overarching identity. Some songs emphasise the mood-based aspects of the band, others the more chaotic side, others the more symphonic and cinematic, others demonstrate a punk energy, and so on across twelve diverse and very enjoyable songs. Of course, the multifaceted nature of the music is frequently displayed in more than one song and usually at more than one time, but suffice to say that Return to Earth draw from a broad range of influences and use them well across the album.

There are so many ideas and creative expressions on Oblivion it’s hard to take it all in at once. Thankfully the songwriting, delivery, and charismatic vocals tie everything together well. Of the singer, his capable voice deals with the material well, so whether it’s big choruses, industrial snarls, or soft crooning, you know he has what it takes to deliver the goods.

So, if you take an early Nine Inch Nails starting point, throw in elements of Mike Patton’s versatility, Faith No More’s genre mashups, The Dillinger Escape Plan’s punk vibrancy, both The Dillinger Escape Plan and System of a Down’s anthemic qualities, and then coat everything in a whole raft of industrial enhancements, (think Gravity Kills, Filter, Pitchshifter, Aborym, The Body, Uniform), then you’ll have a very rough idea of the Return to Earth sound.

Oblivion is an album to visit again and again. It certainly has its moments of direct appeal, but is best experienced when you know its twisting turns and catchy hooks better than when you didn’t.

Very highly recommended for fans of interesting and creative music.