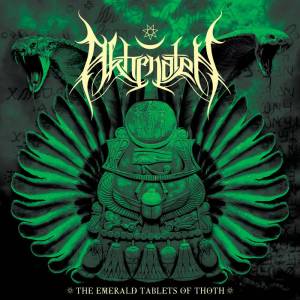 Akhenaten are a death metal band from the US and this is their fourth album.

Akhenaten play a hybrid style of black and death metal that’s been spiced up with Middle Eastern folk influences. The music brings to mind a cross between aspects of bands such as Nile, Melechesh, Arallu, Orphaned Land, Rudra, Septic Flesh, and the like. In other words, bands that use their extreme metal for more than simple brutality.

The Emerald Tablets of Thoth contains 57 minutes of material that Akhenaten use to present their chosen metallic medium. Theirs is a layered approach to songcraft, with musical extras and creative flourishes liberally used to increase the atmospheric and emotive content of the songs. There’s great texture and musical proficiency on display across these ten tracks, and it’s clear that the band know a thing or two about their source material and influences.

The music is well-written and a cut above what your average death metal band gets up to. The tracks are song-based pieces, largely mid-paced, and focus on building atmospheric grandeur and memorable hooks, of which there are many.

Akhenaten’s prominent Middle Eastern influences and instruments are tastefully and intelligently applied to the bare metallic bones of the songs, building them up to more than they would be without them. Entire sections, and sometimes even entire songs, are given over to these non-metal elements, and I have to say that this works very well.

The Emerald Tablets of Thoth is a solid, enjoyable, and well-made album, one that I very much enjoyed listening to.

FAVOURITE TRACK: The Black Land. On this song the band’s folk components are especially well-integrated and expand to cinematic scope.