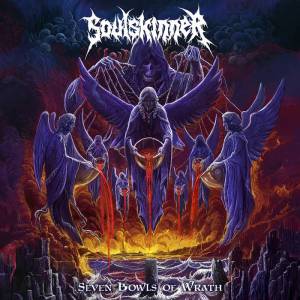 Souskinner are a Greek death metal band and this is their fifth album.

Soulskinner are back! A band I really enjoy, (check out Crypts of Ancient Wisdom, Descent to Abaddon, and their split with Obsecration, Abyssus, and Malicious Silence), they have now returned with a new platter boasting 47 minutes of death metal and a brand new singer.

The new vocalist acquits himself nicely, delivering a performance of ragged deep growls that combine guttural aggression with a more heavy metal-style enunciation that renders him quite eligible in places.

It’s not just the vocals that are new. Of the music, Seven Bowls of Wrath finds Soulskinner in a much more melodic mood. Yep, this is the most consistently melodic I’ve heard them, even delving into truly epic territories here and there. Rich leads and solos abound, and when combined with some choice riffs and the new vocals, it reveals a different side to the band.

The music is also a lot more upbeat and energetic than is typically the case for Soulskinner, and this fits in with their increasingly melodic approach. The songs are well-written and show good structure, dynamics, and pacing. There’s also the occasional unexpected idea or creative flourish too. A touch of melodic black metal can be heard in places as well, which is not an unwelcome development.

The end result is a mix of groups such as Bolt Thrower, Asphyx, Dissection, Septic Flesh, and Amon Amarth. The old-school death metal style of the past is still a part of their sound, but on Seven Bowls of Wrath it has been polished up and melodically enhanced to the point of sounding almost like a new beginning for the band.

So, a new direction for Soulskinner, one that builds on past victories to forge a bright melodic future.