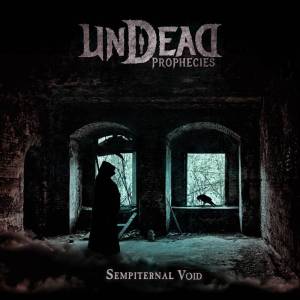 This is the second album from death metal band Undead Prophecies.

This is death metal rooted in the old-school. It’s played with obvious reverence for what came before it, and has clearly injected itself with a potent cocktail of stimulants to hit with as much force as it can.

Atavistic death metal, (think Master, Death, Possessed, Obituary), is mixed with elements of thrash, (think Slayer, Kreator), to produce 43 minutes of energetically delivered material, (including a Venom cover). The band clearly love their old-school bands, and know enough about them to fuse their influences together into a coherent collection of beefy tracks, with belligerent barked vocals that are raw and gruff.

The songwriting focuses on a tried-and-tested formula of simple brutality and aggressive structuring. Melody is used, but not emphasised, although some of the leads and solos do take centre stage when needed. The musicianship is strong, precisely performed with professional gusto.

Old-school this may be at heart, but the production makes the most of the modern technology that exists. Muscular and unforgiving, it allows the band to crush skulls and draw blood with every crisp riff and pounding drum beat.

Overall, there’s a lot to like here. This is a solid release of old-school death metal, played with conviction and served up with a sturdy, competent production. Give this one a spin.

Favourite Track: The Souls I Haunt. More atmospheric and emotive than most of the material here, this is a beast of restrained menace and malevolent pace.